Godhome is a part of the Godmaster Hollow Knight DLC and is the ultimate trial of mastery and tolerance. In this Hollow Knight Godhome Guide, we will go through every fight in the Pantheon of Hallownest.

It is exponentially more difficult than the first four. The Pantheon of Hallownest will be divided into groups separated by benches. We will talk about Hollow Knight charms and spells.. a lot.

The groups as mentioned above will be separated by benches meaning that we will go through everything from the start-up until the first bench and introduce strategies and charms of how to defeat each boss; then go over every boss between the first two benches and so on until the last bench and Pure Vessel with Radiance. 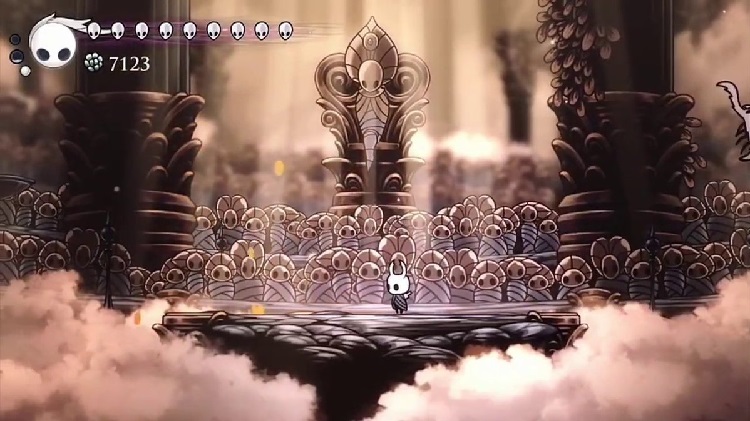 Unlocking the Godhome is the easiest part of this adventure and takes no time if you already have everything you need.

The Godhome can be entered after freeing the Godseeker from her casket in the Junkyard under the Royal Waterways using a Simple Key and then Dream Nailing her.

When you enter, you will see that you need to have defeated every boss in that Pantheon before entering it. The first four each have ten fights; Grey Prince Zote is excluded if you didn’t save him from danger during the game.

Group #1 – the Use Whatever Group 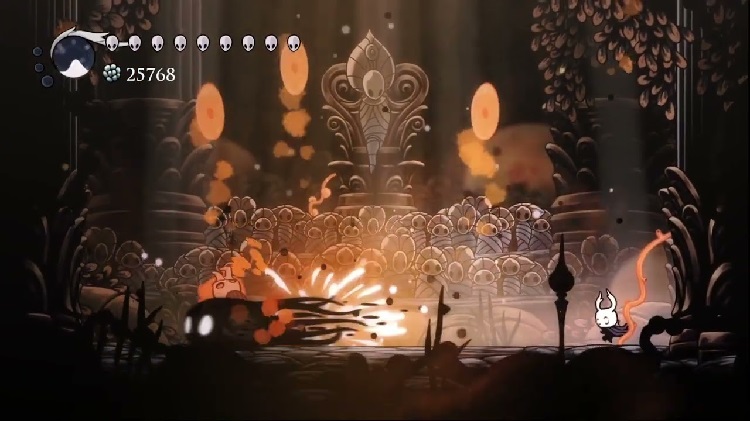 The first group has eleven fights before the first bench, which is much more than the rest, but the first eleven battles are the easiest ones. We won’t talk about each of the boss’s attacks because you already know which attacks they have. We will talk about which attacks and charms you can use to make this journey easier.

You can go through all of these battles without switching out your charms once, but switching some on each bench can greatly sweeten your act; consider doing this in the previous Pantheons as well while doing bindings. The charms you can use all the time are Shaman Stone, Mark of Pride, and Quick Slash.

Every spell is great to use, but Howling Wraiths/Abyss Shriek and Desolate Dive/Descending Dark are best because of their ability to use multiple hits on an enemy.

Abyss Shriek and Descending Dark both hit three times. Vengeful Spirit and Shade Soul both hit numerous enemies at the same time and knock them back, giving you the possibility of hitting one or more enemies more than once per cast.

For the first eleven battles, I suggest focusing on just passing them as quickly as possible to get to the good stuff. This can be done by using Unbreakable Strength and Shaman Stone along with either Quick Slash or Soul Eater. You can use whichever charm helps you not fall onto the spikes after defeating Gruz Mother.

Some bosses have minor changes in the arenas, and they can take a few tries to get used to. Defeating every boss as quickly as possible (unless you’re going for the stagger strat) goes for every boss in the Pantheons. Still, in this first group, you can get used to using Unbreakable Heart and other damage output increasing charms for the later bosses easily.

The most challenging fight here is undoubtedly the last one against Oro and Mato. It is the only tricky one as I still think the fight against Sheo is easier than this one.

The fact that Brooding Mawlek is placed before Oro and Mato makes it more difficult; that’s why I advise perfecting the art of hitting whenever you can and as frequently as you can. Obviously, it ends the fights sooner, but in cases where a boss can’t be staggered, there is no reason not to attack whenever you can using both spells and your Nail.

Using Desolate Dive/Descending Dark in these last two fights is your best friend; in the fights before these two, you will see that every boss is weak to every spell in the right moments.

You can hit many bosses before their beginning-of-the-fight scream animation, so try that as well.

You see the Godseeker here, and this is the first time she doesn’t instantly insult you.

This group has five battles, Xero has three platforms, and the Mantis Lords are sisters, apparently. There is not much to say here that doesn’t also apply to the first group.

You can do this to Soul Master:

Marmu is hilarious. Really easier than in the Pantheon of the Artist.

Every boss in this group is weak to Howling Wraiths/Abyss Shriek, and you can stand below them and do this ^ the entire time as long as you have Soul. As Sheo is tough to miss, the Broken Vessel is the one that stands out here a bit. The Broken Vessel is also weak to Vengeful Spirit/Shade Soul; when he dashes towards you, dash into him, trust me.

As this group is so weak to Howling Wraiths/Abyss Shriek, I recommend using Soul Eater or Cather, Shaman Stone or Spell Twister. Quick Slash, Mark of Pride, and Longnail to get Soul and then use it. Even Grubsong wouldn’t be wrong here.

After the fourth bench is the second Godseeker sighting, here she talks about Unn, saying how the power Unn possessed faded with time. If you Dream Nail her, she will say that the Godseeker troupe would give their minds to see Unn and his power.pu

Every boss here is weak to Vengeful Spirit/Shade Soul, and the Watcher Knights are great as practice for this one. Uumuu is in second place here.

Longnail and Mark of Pride stack with one another. Using both simultaneously between these two benches is a great idea. No Eyes is sadly maybe the hardest boss out of the five because of the arena she’s in; she’s the White Palace boss and annoying as all hell.

The whole fight feels like a loop, and I can never wait for it to be over. In the Pantheon of the Knight, she can at least be a Soul refiller, but here she’s just a pain and what is probably a two-minute fight lasts for twenty minutes in real-time.

In this Godseeker room, the Godseeker will talk about the White Lady and how she escaped the Godseekers’ powerful mind with ease and asks herself the same thing we ask ourselves if she is doing it on purpose. If you Dream Nail the Godseeker here, she will ask if the White Lady is one of “them,” and I have no idea what that means; thank you, Team Cherry. 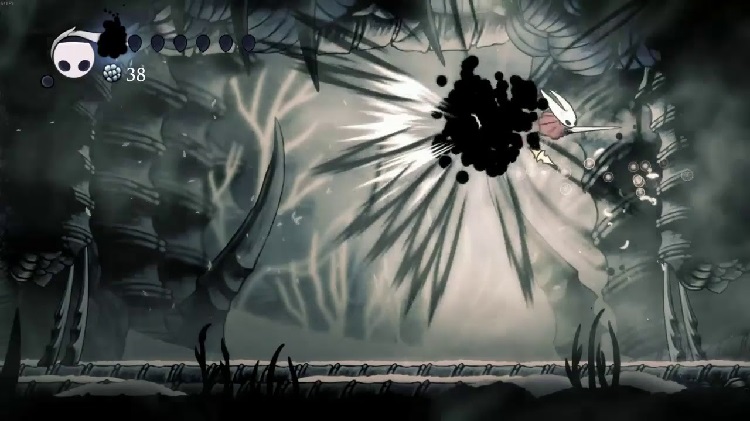 Here in the encounter with the Godseeker, she will talk about the Pale King and how his “afterglow lays heavy upon this kingdom” and how that power was the thing that brought the Godseekers to the kingdom. She refers to him as God-King when you Dream Nail her and asks why the Pale King reduced himself to match “Our meagre shells..”.

There are already guides made on the Pure Vessel and the Absolute Radiance:

You can follow these two detailed guides to defeat the second and third hardest bosses in Hollow Knight (after Zote). Here we will discuss them briefly.

The Pure Vessel can be staggered, but still, you might need Quick Focus to get enough healing in as he does two masks of damage like Nightmare King Grimm does.

The Pure Vessel is the Dream version of the Hollow Knight, and he has almost the same attacks. You already unlocked him, and if he is ending your runs a lot, you can go into the Hall of Gods to practice until you defeat him and unlock the Absolute Radiance.

The Absolute Radiance can’t be staggered, so just aim to get to the last phase with as much health as you can as you have opportunities to heal during this fight.

The Radiance and the Absolute Radiance are kind of all of the bosses combined into one, but harder. She has orbs that fly into you like the Soul Warrior, Soul Master, and Soul Tyrant. She has sword walls similar to the ghosts that No Eyes has and Spiked Floors that you have to avoid like the floor doesn’t exist. Not to go all into this, but you’re ready even if it doesn’t seem so. Good luck!

Question: Is Pantheon of Hallownest Doable?

Answer: The Radiance and the Absolute Radiance are kind of all of the bosses combined into one, but harder. She has orbs that fly into you like the Soul Warrior, Soul Master, and Soul Tyrant. She has sword walls similar to the ghosts that No Eyes has and Spiked Floors that you have to avoid like the floor doesn’t exist. Not to go all into this, but you’re ready even if it doesn’t seem so. Good luck!

Question: How Hard are the Mantis Lords?

Answer: The sisters of battle (fighting against all three Mantis Lords after the first phase) are easier than you might assume

Answer: Don’t tank damage with Nightmare King Grimm like you did with Troupe Master Grimm; he will end your entire career

Tamara Hrnjacki
Tamara is a writer and a lover of all arts who was always drawn to pieces built with evident emotion. Sharing those feelings and evoking the desire in other people to lean towards understanding the deeper meaning beyond the surface became her passion. The thing that she found combined all of her favorite art components into one were video games. Games made by people passionate about their work; games that stir emotion with small details and push you to develop a love for the characters, feel for them, and feel what they feel. She considered herself an old-school gamer before playing Super Meat Boy, The Stanley Parable, and Don't Starve. She thought that the age of video games was ending with almost no original content, but a revolution had already started.
Latest posts by Tamara Hrnjacki (see all)