Terraria is a game full of customization. Building a house from meteor or magic wands from diamonds; this game gives you a lot of diversity.

One thing it doesn’t do is give you a lot of time to craft anything without dealing with monsters.

Not only does it bring slimes, zombies, and flying eyeballs crashing into wherever you’ve made home above ground, it brings giant bosses. Each biome brings new dangers; each layer you dig lower carries wonders and troubles.

If you make it to the deepest parts of your map, you can even fight demons and the Wall of Flesh. Eventually, going into Hardmode. 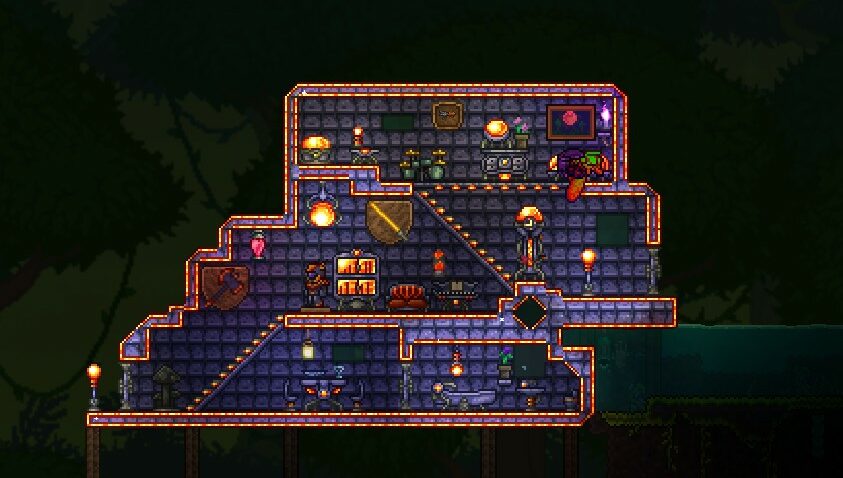 With all the many things to come, we’re here to help. This Terraria getting started guide will set you down the road to prepare for the many dangers ahead and keep you alive long enough to get the skills you’ll need to survive them.

So, let’s get you crafting.

Create a small map for your first playthrough. A random seed and a random selection are fine. Crimson or Corruption won’t matter much at the moment. Make sure to choose a Classic world for your first time.

Choose a Classic character when you get to the character creation screen. You’ll lose money when you die but not your stuff–this is very good.

I chose a Medium core character the first time. I was forced to go back and collect my stuff so often and wasted many hours cursing at my screen and losing sleep instead of progressing in the game.

Why? If you leave things on the ground and exit the game, they disappear forever.

Yeah, that means if you die on Mediumcore and don’t collect your stuff, that stuff is gone for good. Suppose you only had one grappling hook or went too far into the dungeon without knowing a skull would insta-kill you for not fighting the boss first. In that case, you will find depths of rage in you that you did not know existed.

This may have benefited me in learning the ropes to writing an article like this, but it has no other purpose. Anything besides Classic is very much unneeded. So, choose a Classic character, name them, make them look however you like, and load them into your map.

When you begin Terraria, you will start next to The Guide. You’ll have basic tools and no real advice. Here’s a little bullet point order of things you can do right out of the gate.

All that was listed above can be done before nightfall. So, what you can do next is make some wooden planks from any wood in your inventory. This is one of the few things you can craft without a crafting station. These blocks can be placed and walked on like other blocks. However, they can also be jumped through.

Pressing down on them will let you drop right through them. Setting these planks as you dig down can make it easy to get back up. Here are some more steps to follow.

There is only one more thing you need to know outright, how to use The Guide.

When you talk to The Guide, you’ll see a small option for crafting open up on the screen. By selecting any item in your inventory and placing it in this box, The Guide will show you every possible thing that can be crafted with it.

Scrolling up and down through the options to see the possibilities. When you find one you’re interested in, hover your pointer(mouse) over it. It will show you what items are needed and what Crafting Stations(such as an anvil or a workbench) you will need to be next to when you choose to craft it.

Use this to make all the new armor and weapons you need to move forward. Do explore more of the map, too. Many good weapons/items are lying in chests or dropped from enemies.

If you are trying to do Journey Mode, you can still use the above method as a starting point. I still suggest running Classic Mode first until you get the hang of the mechanics.

You can toggle the world you create in this mode between Classic, Expert, and Master. This lets you increase or decrease the difficulty of monsters and bosses and even affect their item drops by doing so.

Journey Mode lets you control a lot of other things as well. You can lower monster spawn, for instance. It can be used entirely just to build stuff. You can duplicate items and play with the time of day to affect what you are fighting. It allows you to manipulate things for your amusement. You can even enter God Mode to practice fighting or have fun murdering the highest-level bosses.

You can only enter a Journey Mode map with a Journey Character. They will start with extra equipment. Still, you won’t be able to take them into the regular game modes.

The enemies hit harder and have more HP, and the Bosses get big upgrades and more aggressive attack patterns. It’s not new-player-friendly.

Why would you do Expert Mode? The Bosses in Expert Mode drop unique and powerful equipment items.

Once you’ve entered Hardmode in your normal map and acquired some Hardmode equipment, I suggest starting an Expert Mode map with your character.

Use your upgraded equipment to challenge some of these Bosses for their Unique Item Drops. The Eye of Cthulhu drops a specifically good shield.

Okay, you’re brave. This is the upgrade in difficulty to Expert Mode. Yes, it does have unique item drops. You should never start fresh here unless you are a top-tier dodging, combat-ready, with no fear of rage quitting gamer.

Hard mode is not selectable. It happens in a world when you defeat The Wall of Flesh. It can occur in all of the above Modes. Hardmode on Master is the most challenging combat in Terraria.

OH! A fun thing to do is Team PVP. You can see your team’s health bars and their locations on the mini-map in team mode.

You can also play Capture the Gem mode, which is pretty much the same as Capture the Flag. I find a lot of joy in this. You try to steal the large gem of one team and bring it back to your base to score a point. If a player holding a gem dies, it falls next to them.

You won’t drop any coins if you are killed by a player in PVP.

Things I Wish They Told Me

When I first played Terraria, I knew nothing. I tried every weapon, learned to craft the hard way, and was completely blind. I finally caved in and looked at a Guide when I couldn’t mine Hardmode ore. So, let me save you my stress now that you’re here, or at the very least, help you with your current struggles.

Answer: Yes. Follow this guide to start, and it will be less hard for you than it was for me, I promise.

Answer: Very similar. I prefer Terraria’s battle mechanics, and I like the 2D world-building as I can see more of what I make. Terraria also has a broader array of enemies, weapons, tools, blocks, and bosses.

Question: Is Terraria easy to learn?

Answer: Yes. I hope this getting started guide makes that the case for you.

Getting started in Terraria is mostly about getting a move on shaping your first town and building your primary crafting stations as fast as you can.

It is all about speed and keeping safe. Learning combat can come after you’ve made a safe space. Moving deeper underground and throughout the many other biomes can begin once you’ve got a weapon you’re doing okay with.

Get ready, this game pretends to be boring because of all the digging, but it will not be boring. It will get your heart rate up, and you’ll be a crafting master before long. Not to mention a slayer of giant bosses that travel through blocks. That’s right, you won’t ever be safe from a boss. Did I forget to tell you that?