The yoyo is a weapon in Terraria that deals melee damage at a varying range, depending on the type of yoyo and accessories equipped.

It’s one of the few weapons in the game that has accessories directly connected to its effectiveness.

In this Yoyo Terraria Guide, we’ll explore several types of yoyos. Though their attacks may be similar, a few individual ones stand out for their damage and additional effects.

Getting Your First Yoyo

To acquire the basic yoyo in Terraria, you need to put down a workbench and have Cobweb x20 and Wood(any) x10. Doing so crafts the ‘Wooden Yoyo’ and is the earliest on the tree of the yoyo in-game.

Three essential accessories can be combined into the ultimate yoyo assist tool, the Yoyo Bag. That does not mean you don’t benefit from the usual boosts of melee damage, critical percentage increase, and melee speed other equipment gives you.

Having equipment that increases your knockback to high may not be beneficial when using a yoyo. The yoyo can do more damage per second(DPS) to enemies kept within range. 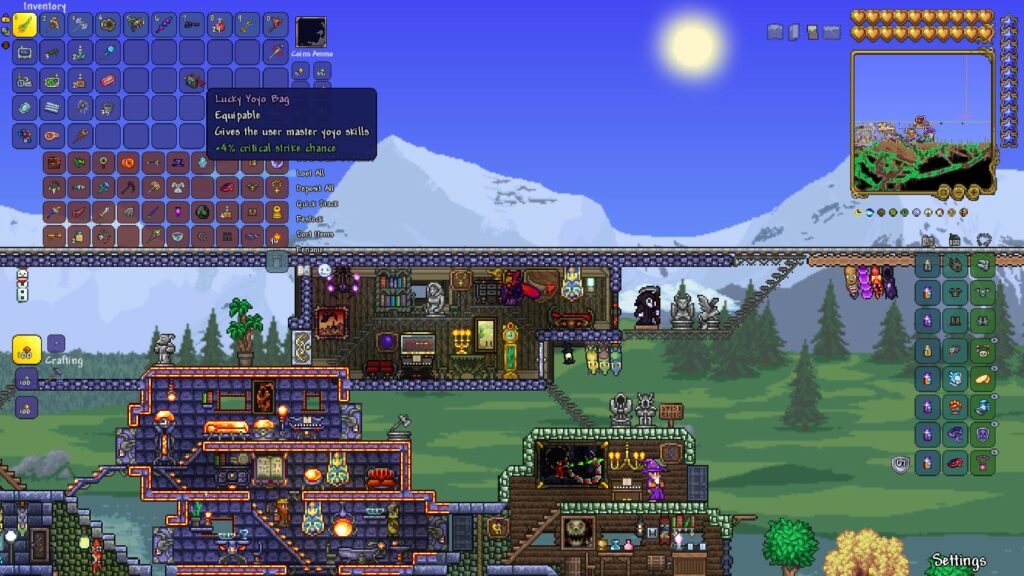 Defense can become less important in early Hardmode as everything kills you quite quickly, so it’s often better to stay mobile and kill them first.

Applying Luck to the Yoyo Bag and stacking critical chance with the Yoyo modifier and other equipment gives EACH of the four yoyo’s created from its attack a high probability of causing a critical hit. That being said, Warding is always a suitable modifier for any accessory.

The Many Yoyo’s in Terraria

Here are all of the current yoyo’s in Terraria and a quick look at their stats. Reach refers to the number of tiles it can hit away from the player.

All yoyos have a fast attack speed and a 4% Critical chance except for two.

The letters KB stand for knockback. That refers to both the chance and distance it knockbacks an enemy it strikes.

Time refers to how many seconds you can hold the yoyo out attacking before coming back to you.

Killing the Moon Lord is an achievement that usually means you need no help at all in Terraria. Still, let’s talk about the most powerful yoyo.

Quickest Route for a Good Yoyo 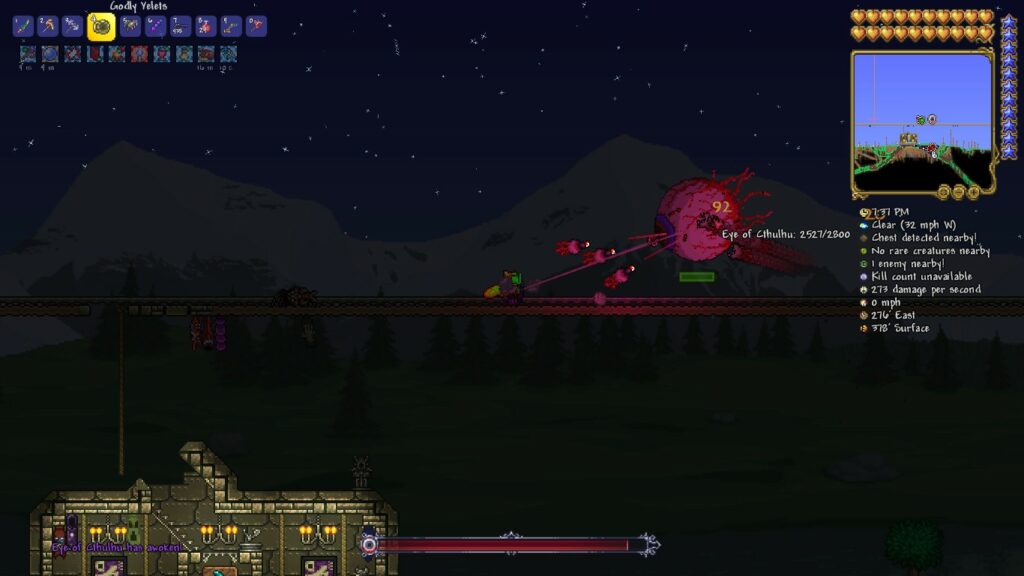 Make a Wooden Yoyo and dig until you’re able to mine at least silver-level armor.

Once you’ve crafted this, go ahead into the jungle and hunt the items needed to craft the Amazon. The Amazon can be useful against Skeletron.

Upon defeating Skeletron go right to Hell to build a lava bridge for fighting the Wall of Flesh, and you’ll kill enough enemies one will surely drop a Cascade.

If you’ve followed the previous directions, take note of this. Enemies in the Underworld(Hell) don’t get the same upgrade as every other enemy when Hardmode first starts. So hunt them down and get a Hel-fire as quickly as you can. You now have a great early Hardmode weapon.

Go ahead and use it to get an Amarok in the Snow Biome of your map. Because an Amarok causes Frostburn, it ends up being more capable of dealing with enemies than the Gradient or the Code 2.

Demonic and Godly modifiers give the yoyo a +15% damage boost and +5% critical chance. Godly, however, also provides a boost to knockback, so while good in some sense, it can send enemies a little out of the range of good DPS.

I Suggest Godly on Yoyo’s of Weak or lower knockback(KB) and Demonic on any with Average or Higher KB.

Note that a yoyos melee speed is unchangeable, so no modifier adding to melee speed will help it. 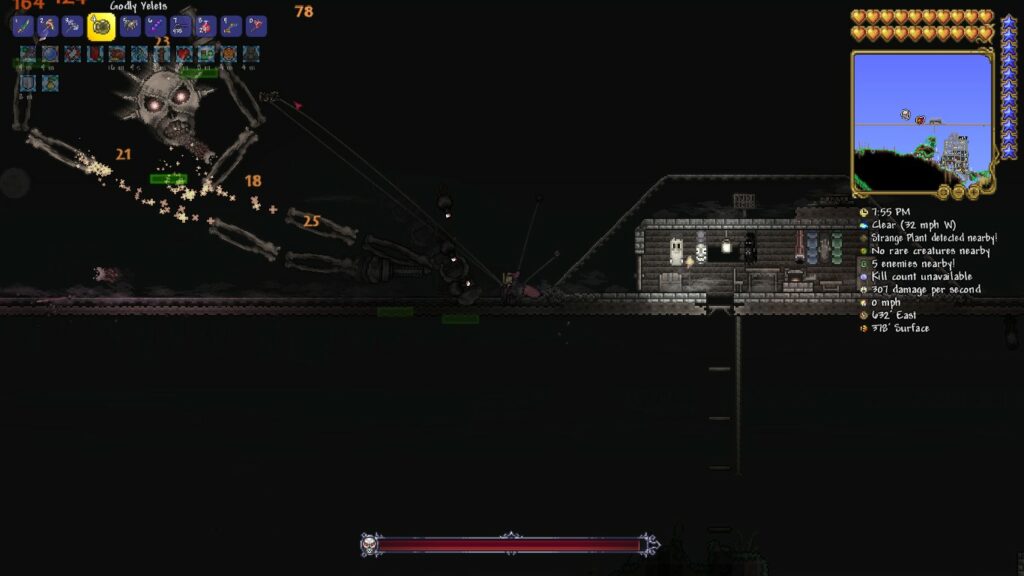 A yoyo is launched like a fishing pole and stops upon hitting an object or reaching its maximum range. Every time it hits something, its TIME out is reduced by one second. Due to this, it can strike enemies multiple times and keep the player out of many of the common enemy’s attack range.

It is possible to attack with a Yoyo from inside a safe enclosure, such as a makeshift room with two open spaces to launch it through and hit enemies without the risk of any damage. The game mechanics let it notice it is attacking from around a block and not directly. So, this safer tactic does lower the overall damage output of the yoyo.

Because of how the physics of the in-game yoyo work, you can move it around once it’s sent out in a 360 arc. In this way, it can hit enemies below the player’s platform or above it.

The versatility of the yoyo can make it very effective for dealing with swarms from a safe space in early Hardmode, during a Blood Moon or a Solar Eclipse.

Many of the yoyos in Terraria can be purchased as real-life yoyos for your collection or to practice your yoyo skills in real life. Do make sure not to try and challenge any dangerous creatures with them.

They have a significant damage drop in real life. Not that you should be challenging real-life creatures anyways.

Is ‘Walking the Dog’ still a cool yoyo trick?

-Build a sky bridge with hay and get some good running shoes. Use this and The Amazon to hit pre-Hardmode bosses while running the map constantly. Easy wins.

-Collecting the Hel-Fire yoyo at the start of Hardmode and building a safe house above ground using this yoyo can help you farm during a Solar Eclipse.

-Because of often hitting walls, early game yoyos are not very useful underground.

-If you like yoyos, put as much work into getting a Yoyo Bag as you do getting a good yoyo.

-The weapon takes more practice than others, so start using it as soon as you can to get good.

Question: Why is the Yoyo a Weapon in Terraria?

Answer: It’s not the first time a yoyo has been used as a weapon, and the creators of Terraria do like to pay homage to many classic games and movies. One such classic game you can see that had a lot of influence on Terraria is EarthBound. A yoyo is a weapon well associated with that game.

Question: Is a Yoyo a Good Weapon in Terraria?

Answer: They can be used to a significant effect. Amazon can do high DPS in pre-Hardmode and isn’t difficult to acquire. The Amarok and the Hel-Fire can save your tail in early Hardmode, but they are not the best for the Hardmode Boss battles.

Most yoyos before unlocking the Terrarian won’t be super helpful against Hardmode Bosses in general. However, with the Eye of Cthulhu, a Yoyo Bag, and a good strategy, a yoyo can be on par with the best weapons.

Question: What Yoyos Can You Craft in Terraria?

Answer: The Wooden Yoyo. The Malaise. The Artery. The Amazon and The Chik.

Question: Are there Yoyos in Terarria Mobile?

Answer: Yes. Though some damage and stats may vary from the PC version.

Question: How Do You Hold Two Yoyo’s in Terraria?

Answer: Equip a Yoyo Glove or a Yoyo Bag.

Question: Are Yoyo’s Melee in Terraria?

Answer: Yes. So any equipment that increases Melee Damage will affect a yoyo’s damage output.

Question: Can You Increase a Yoyo’s Melee Speed?

Answer: No, you cannot. So anything that increases melee speed is useless when wielding a yoyo.

The yoyo in Terraria is a fun and valuable addition to the many weapon choices. It can provide protection in addition to damage when combined with the Yoyo Bag, as you can move it all around you with a good range and four swing cylinders that batter your foes.

I would never overlook picking up and utilizing this weapon when playing one of the most popular and challenging indie games ever to hit the market.