To give you some insight into where my head was when I took on this game for review, I was very optimistic. Having heard the raving reviews for this title on PC, boasting this game as one of the indie highlights of 2021, I was excited to see what this indie game had to offer.

Then if you know me, you know that I put a lot of stock into the publishing house, Annapurna Interactive, then combine all of this with a fun, musical space opera theme, and it all seemed that this game couldn’t miss.

The game laid out an infinite cosmos before me, filled with psychedelic shapes and colors, auroras, and light beams aplenty. It allowed me to shred riffs with my holographic guitar, acting as a spark, a catalyst bringing a dormant planet to life. Yet despite all of this, I can’t help but well deeply underwhelmed.

In this The Artful Escape review, I will break down the reasons why I feel this way, what the game does well, where it is found lacking, and I will ultimately give my opinion as to whether this game is worthy of your time and money as an avid video game consumer. So join me as we delve into the limitless yet limited universe of The Artful Escape.

Vanity, All is Vanity

Let’s begin with what The Artful Escape does well. Not just well, exceedingly well, it’s presentation. The Artful Escape has some of the most jaw-dropping visuals that one could expect from an indie title. The game drops the player into a sleepy town, and initially, the game feels like a take on a port from Spiritfarer as you talk to the locals and the game slowly drip-feds the player exposition.

Then as you sleep before your big show, the game visually bursts to life with bursts of neon, lights, lasers, intergalactic rifts, an infinite cosmos oozing every hue imaginable, and a cacophony of gorgeous sounds and riffs to act as the soundtrack to your psychedelic experience.

Then as you travel through the game’s whimsical areas, the game keeps it fresh with varied, otherworldly biomes, quirky alien discos, and flowing side-scrolling areas where you can wail your guitar and sail above the clouds.

At times, I have to admit, the visual and auditory aspects of this game done an awful lot to pave over the cracks in other areas of this game, and once or twice, I can admit that I felt powerful, felt like a genuine rockstar from another galaxy and for that, the game deserves praise. However, while the artistic flair of this game is clear for all to see, this just feels like a front for what is a shameless vanity project. Why? Well, keep reading.

A Desperate Plea to be Seen as ‘Profound’

We move onto the narrative, and boy, do I have a bone to pick with this aspect of The Artful Escape. Now, before you call me cynical, I can see what the team has tried to do here. They have tried to make a nonsensical space opera with lots of moving parts that deliver constant wonderment, euphoria, and whatnot. Well, I hate to burst the bubble here, but in my opinion, it really misses the mark.

Now let me make it clear that it isn’t the fault of the voice actors, as each performance is sublime. It’s purely due to poor writing. The game takes itself way too seriously, weaving together line after line of dialogue that just flies over the player’s head about vague entities like Glamourgonns and the like.

Honestly, if the game had offered more humor, more 4th wall breaking, and a more captivating premise, then maybe it would have grabbed me more. However, all it did was make a plea to me, the player, that I should see this story as genius, utterly profound, and hail the writer’s as gods among men. Well, I don’t, and Hitchhiker’s Guide to the Galaxy this is not.

Now, let’s talk about the gameplay, oh how I loathed the gameplay here or lack thereof. Now, just to preface this, I love walking simulators, and I love simplistic games with minimalistic mechanics; I have a Journey tattoo, for goodness sake. However, minimalist and simple can sometimes equate to bland and lifeless.

This game is the epitome of this. The game will see the player walk around and talk to people around the various areas, absorb exposition, which, as mentioned, never really equates to anything worthwhile, and take in the scenery, which, again, as mentioned, is stunning.

This is far from the worst aspect of the gameplay as this is bread and butter for a walking sim, but if you are going to do this, you have to make sure the narrative is next level, which in this case, sadly isn’t.

However, this could all have been overlooked had the game offered a core gameplay loop or a solid, fun mechanic where players could have oodles of fun. This won’t be found in The Artful Escape, I’m afraid, as the game banks on rudimentary platforming sections that serve as a vehicle for more beautiful vistas and set pieces.

However, the platforming is never a challenge; there are no light puzzle elements to the point where it is almost patronizing. Plus, if you are going to have set pieces, you need to build to them, offer conflict and resolution, make those moments stand out and feel special. However, as the entire game is a visual display that cranks it up to eleven, the gameplay does nothing to appeal to the player and these moments just feel like the norm.

Then we come to the musical sections. This mechanic just feels so forced and devoid of any thought or creativity. The player is introduced to a musical key, or as many of those around in the ’90s will refer to as a Simon. The player will be played notes along with corresponding colors, and your job is to simply play in order like a simple memory game. It is such a trivial mechanic and one that the game leans on quite a lot. So overall, the gameplay is a real letdown.

Simplicity Against a Complex Backdrop

When it comes to the user interface for this game, we can’t really complain. Thanks to the minimalistic and simple gameplay on offer here, plus the clear and accessible control scheme, we have to say that this game does a fine job in this department. It is an experience that any gamer can enjoy and that counts for a lot in my eyes.

Accessibility is important, and all gamers are entitled to the same fun that able-bodied gamers are. However, outside of the simplicity, the game doesn’t offer any color-blind settings or other staples of gaming accessibility considerations, which for a game as bright and zany as this, is a real oversight.

A ‘One and Done’ Experience

Then lastly, as for replayability, the game does have some branching paths and choices that the player can make that will define how Francis carries himself onstage and shape his new persona.

However, outside of some arbitrary details and lines of dialogue, they don’t have any bearing on the story or have any consequences for the player. Overall, this is a game that has far from an emergent design, and when you have seen all the wonderful visuals on offer here, there is little reason to return to this one.

Alternatives To The Artful Escape

Just before we wrap this thing up, we want to give you a list of games that you may enjoy if you liked what The Artful Escape had to offer. Here are some games that you should check out:

Overall, I step away from this trippy, outlandish, and otherworldly affair feeling rather deflated. While many may throw a trade of abuse my way and suggest that ‘You simply don’t get it,’ well, I say that perhaps I don’t, but what’s to get?

This game is a visual spectacle and a treat for the ears for the most part. It’s clear that a lot of love went into the creation of this game, and if we judged on visuals alone, it would be a whopping ten. However, outside of the presentation of this game and the wonderful Post-humous performance of Carl Weathers, this game just feels like an incoherent mess.

This is most apparent in the vivid get vague narrative that promises the world and never delivers. The mechanics, which equate to a game of Simon Says and some rudimentary platforming and the characters who are so devoid of depth and likability that the story never really stood a chance of getting off the ground.

With all my heart, I wish this game captivated me like a laser light show space opera, but instead, all it is in my eyes is a vanity project which fails to grip the player.

Question: Is The Artful Escape A Rythym Game?

Answer: We suppose so in the loosest sense of the term. The player will, on occasion, be asked to match color-coded musical notes with that of another entity on screen, so aspects of this game are like a rhythm game. However, we would see this game as more of a walking simulator, action-adventure, or platformer.

Question: Where Can I Play The Artful Escape?

Answer: This video game is available on PS4, Xbox One, Nintendo Switch, Xbox Series X/S, and of course, the PS5. This game was created by Beethoven and Dinosaur and published by Annapurna Interactive.

Question: How Long is The Artful Escape?

Answer: It really depends if you stop to smell the roses, speak to all of the folks within this game and take in the breathtaking vistas. Not to mention how adept you are when it comes to simple memory puzzles.

However, if you want to enjoy the main story and see all that the game has to offer, you will need to set aside at least 4 hours. If you want to get all the achievements and see absolutely everything, you would be looking at a time closer to 5-6 hours—all in all, a rather short experience. 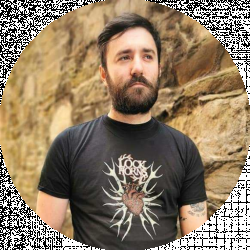 Callum Marshall
Callum is the gaming managing editor and a gamer who will always try to shine a spotlight on indie games before giving AAA titles the time of day. He loves nothing more than finding an unearthed early-access title and seeing what they have to offer. Plus, he’s even got a tattoo of The Traveller from Journey, so you know that love for indies is legit! While overseeing the day-to-day running of the site, you’ll commonly see Callum carve out some time to produce some content on one of his favorite games of all time, and lead from the front. Callum has been around the block within the gaming industry, working as an Editor-in-chief for a number of well-respected gaming outlets, he has worked as a games tester, he has gaming podcast experience, has worked in gaming PR.