This Destroyer Terraria Guide will help you get ready for one of the earliest Bosses in Hardmode.

Perhaps the highest damage dealer of the Mechanical Bosses, the Destroyer drops some important loot.

We’ll help you get ready for the longest Mechanical Boss, and in doing so, you may find it’s helped you with other Bosses as well.

Get a good auto swing weapon ready; we’re going after some Spice.

Bottom Line Up Front: This guide will assist you with The Destroyer, including battle tips, area setup, and more.

A player can set up for Hardmode before it happens. As you control when Hardmode starts by just not killing The Wall of Flesh.

There are a few essential tricks that are useful for any run.

These things are helpful to make Hardmode easier once it opens up. Though somewhat time-consuming, not doing these before Hardmode could cost you even more time later. 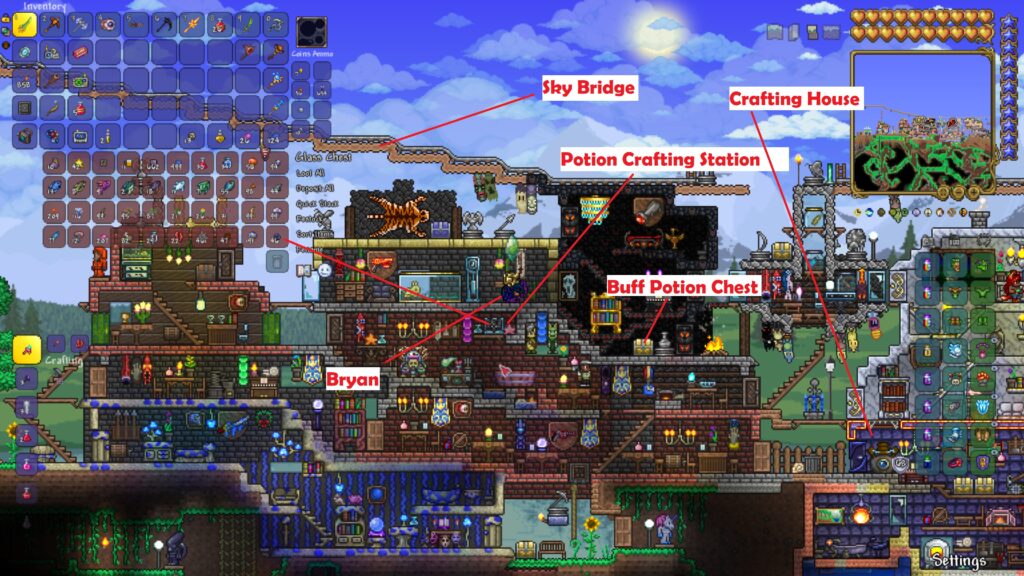 Statues are found underground, and that’s pretty much the only way to get most of the good ones that will assist you in the hardest fights in-game.

When building a Hellivator, i.e., digging deep holes underground, you are more likely to reach underground cabins and collect the statues needed.

Two to three Heart Statues for all players is an optimal find before Hardmode. Star statues if you use magic and at least one Slime Statue.

Make sure to grab up a mirror as well; they return you to spawn instantly.

Set wires that connect a statue to a timer. Every few seconds, the timer goes off, and the statue it’s connected to spawns something(some statues don’t do this). You can place wall pieces to make this easy.

In the case of the Slime Statue, it spawns a blue slime. Heart Statue generates heart pickups, and Star Statue spawns mana stars.

Place Heart and Star Statues far enough away from each other that they can’t be seen in the same frame on your Sky Bridge. Connect them to a 3-second timer. When you are about to fight a boss, activate the timer.

This will help you with most bosses even in Hardmode, it isn’t a cure-all, but it is a great boon.

Still, the Destroyer is a worm boss, and it will be coming from the ground. It will come up to the Sky Bridge, but it is only somewhat effective. You can try to set it up on the ground, but another option is to prep an invincibility house.

Setting a timer up in a small space for blue slimes to spawn every one second with your Slime Statue and a Heart Statue just above it where the hearts fall onto you. You will need an accessory for this.

This item increases your invulnerability time after taking damage.

That strategy can still lead to your death as it isn’t a guarantee that the slime will hit you before the boss, so a heart statue is needed as a buffer. I did use this strategy effectively to defeat The Destroyer for the first time in my earliest Hardmode run-through, it was a close call, but it worked.

The problem is, a Cross Necklace is only dropped in Hardmode from Mimics (normal ones). In other words, what I’m saying is that setting up in Pre-Hardmode will not be enough to go right into a fight with The Destroyer. You’ll need to do some hunting in Hardmode as well.

Craft a Molten Pickaxe before you defeat the Wall of Flesh after readying everything for Hardmode. Collect the Queen Bee sword before this as well. It will be another huge help.

Underground Hardmode is as rough as it comes, but you have to brave it. You need to use that Molten Pickaxe to mine Cobalt or Palladium and make a set of armor and pickaxe. To spread the Hardmode Ore, you need to use the Pawnhammer dropped by The Wall of Flesh and destroy a Demon or Crimson Altar.

Each Altar destroyed randomly sets a crimson or corruption block on the map(not great but fixable later) and sets of Hardmode ore. Destroy three of them right away.

You can accomplish this before a Mechanical Boss comes, and in doing so, you may even run into a Mimic. HOWEVER, suppose you run into a special Mimic, such as a Hallow or Crimson Mimic. In that case, you may end up dying without Hardmode armor or weapons.

While upgrading, you should get lucky and pick up plenty of new items, but you need a better weapon. The easiest Hardmode weapon to get is a yoyo in the Underworld (Hel-Fire

). All enemies down there have a chance to drop it as soon as Hardmode starts. If you can collect that and craft a Yoyo Bag, you will find the Hardmode Underground a tad easier.

Keep trying to upgrade your armor and pickaxe until you get to Titanium or Adamantite armor. You are likely to fight The Destroyer before this, however. 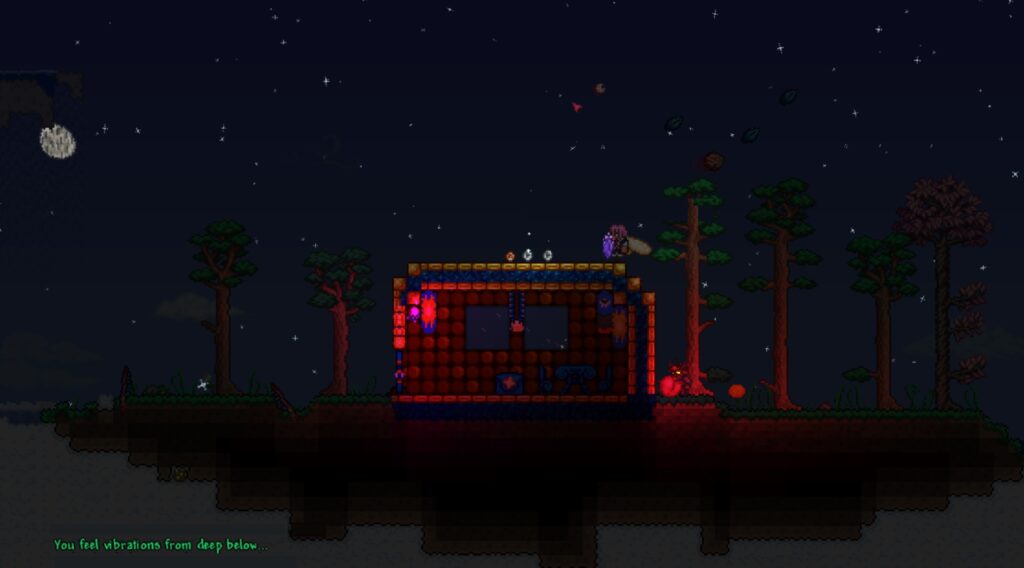 Once you have destroyed a Crimson or Corruption Altar, there is a chance for a Mechanical Boss to spawn every night. While some of these can be avoided by being underground, guess which one can’t? That’s right.

If you see the eerie message across the screen, “You feel vibrations from deep below…”

The Destroyer is coming. Return home and rush to the spot you’ve made for the fight. Get those Statues ready, and prepare for this fight.

An Auto Swing weapon or any projectiles that pierce are very effective here as they can hit multiple sections at a time. Projectile attacks or Minions will help with the probes it launches, making at least one of these a must.

To prepare better, you can take iron skin, thorn, regeneration, and other potions to boost your stats. If you prepped the potion crafting house, these should be easy to quickly find.

If you have any food go ahead and eat it. Everything helps. 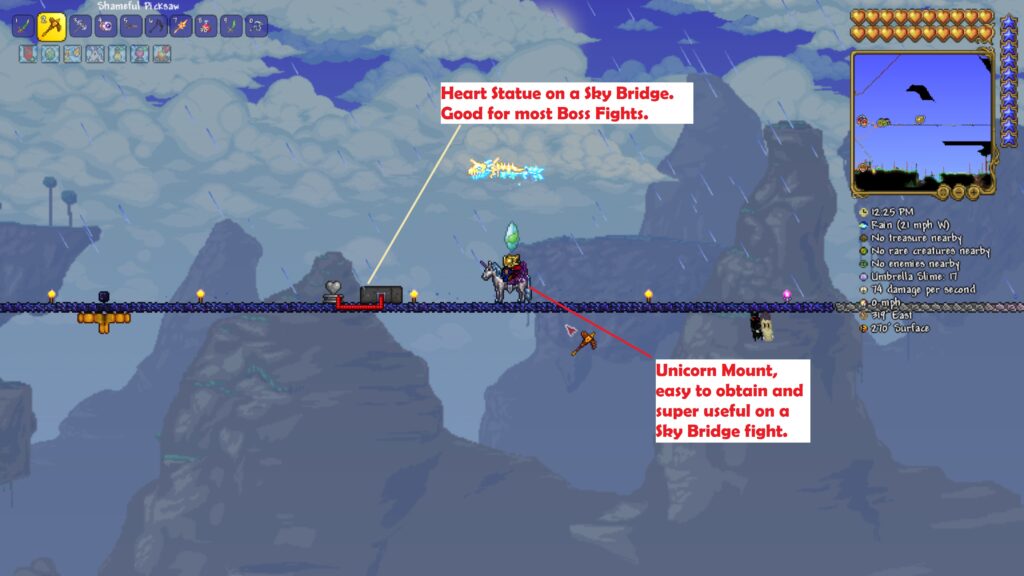 Hop on your fastest steed and run across your sky bridge, firing a projectile weapon or holding a yoyo with a yoyo back to hit the Destroyer’s head as it chases you. Do this back and forth, collecting the hearts as they fall from your statues. When you reach the farthest statue, turn around and go back to the other.

It does fire lasers and drones that fly and attack you, so even if you are staying ahead of it, you will still take damage.

This strategy may keep you alive, but it isn’t guaranteed to kill The Destroyer the first time because of its high HP. If it fails, you’ll have to keep mining and grinding for better damaging weapons. 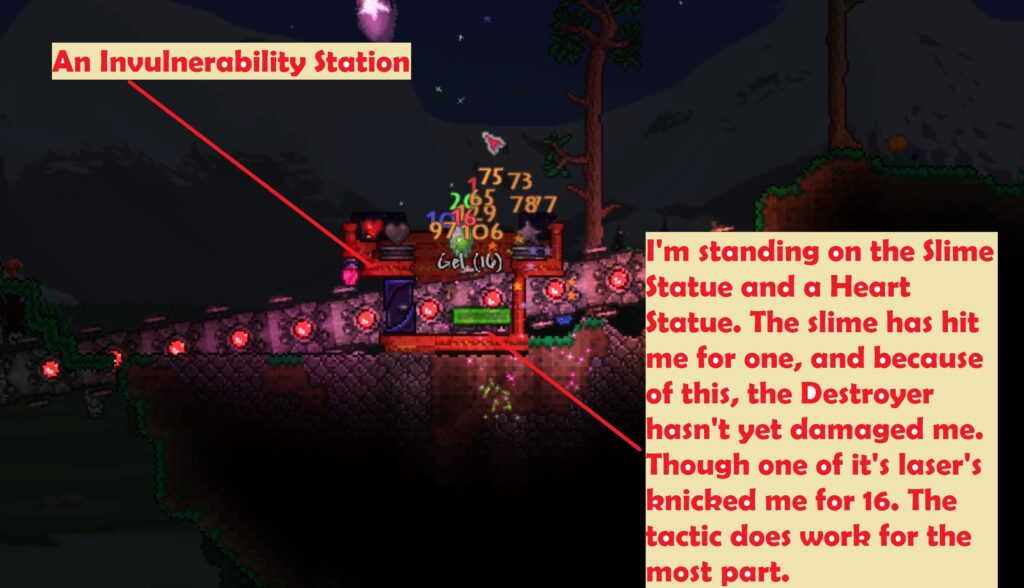 Here’s the scarier one that worked for me. I used a Wrath Potion to up my damage, a summoning potion to increase my minions, and my best Auto-Swing weapon. At that time, it was a Beam Sword I picked up from Armored Skeletons Underground. This sword does 52 damage and fires a projectile, so it does more damage as it hits the other parts of The Destroyer. That helped.

With my Cross Necklace on, I sat in my small, roofless house, as depicted in the picture above, and I fought The Destroyer. I can attest that the Invulnerability Strategy with the Blue Slime spawning and hitting you does mitigate a lot of damage. I still had to use potions and, at one point, my mirror to run for a bit before returning to the spot as I nearly died.

This strategy is simple, stand where the blue slime spawns right into you and under where the heart falls. Spam the attack button at the charging Boss and pray. That’s all.

You can craft an item to manually Summon the Destroyer to fight, but it can only be summoned at night in the game(7:30PM game time). Craft following the recipe below.

Question: Is the Destroyer Strong?

Answer: Yes. It is a very dangerous Boss.

Question: Which Mechanical Boss is the Hardest?

Answer: I think it is The Destroyer, actually. Making errors against it can undoubtedly cause you to lose life faster than the other two.

Question: Is there any reason to Farm The Destroyer?

Answer: Yes. Collecting the Soul of Might it drops is essential for a few good crafting choices, including the Pickaxe Axe, which you’ll need to mine Chlorophyte.

No Boss in Hardmode is easy, and The Destroyer is no exception to this rule. However, unlike some challenging bosses, it is manageable with one of the two simple strategies above, and you need to defeat it to unlock more of the game.

We hope you’re able to kick its tail, collect its drops, and accomplish all your goals in Terraria. Come back for more guides any time.