A Pickaxe in Terraria is a necessity you cannot do without. That being said, it can be one of the most monotonous grinds in the game.

As you dig slowly through the dirt and stone, you’ll realize the only way to handle the stronger enemies is to gather more powerful ore. You’ll find the need to upgrade your Pickaxe.

We’ll run through what we think the best pickaxes are to pick up as you progress through the game based on the speed you can get them and how helpful they will be.

Near the end of our Pickaxe Terraria Guide, we’ll be a complete list of all the pickaxes for further reference.

As quickly as you can, build a house for yourself and your Guide with some chopped wood and make a bow and some arrows as they’ll let you easily traverse the topside in the early game.

Pickaxes Crafted at an Iron or Lead Anvil

What’s that in the Ocean?

As early as you can make an Iron Pickaxe, you can also make a decent Fishing Rod: The Reinforced Fishing Pole. Grab up some easy bait on your way to the ocean Biome using a Bug Net purchased from the Merchant.

Have an empty house and more than 50 silver coins in your inventory to get the Merchant. Once he spawns, pick up the bug net and catch every bug you can.

Head toward the Ocean Biome and build a safe fishing spot with a crafting station for potions. You need a bottle placed on a flat platform inside a house to craft potions, such as a table or a workbench.

Place a Furnace in your Fishing House to convert sand into glass and craft bottles if you need. Craft some Sonar Potions with items found in the Ocean Biome. You’ll need one Bottled Water, Waterleaf, and Coral.

Why did I suggest all of this? You can fish up a Reaver Shark. It is the best Pickaxe until you can get a Nightmare or Deathbringer.

The Sonar Potion will tell you what you’re catching, so don’t reel in until you grab up that Reaver Shark. 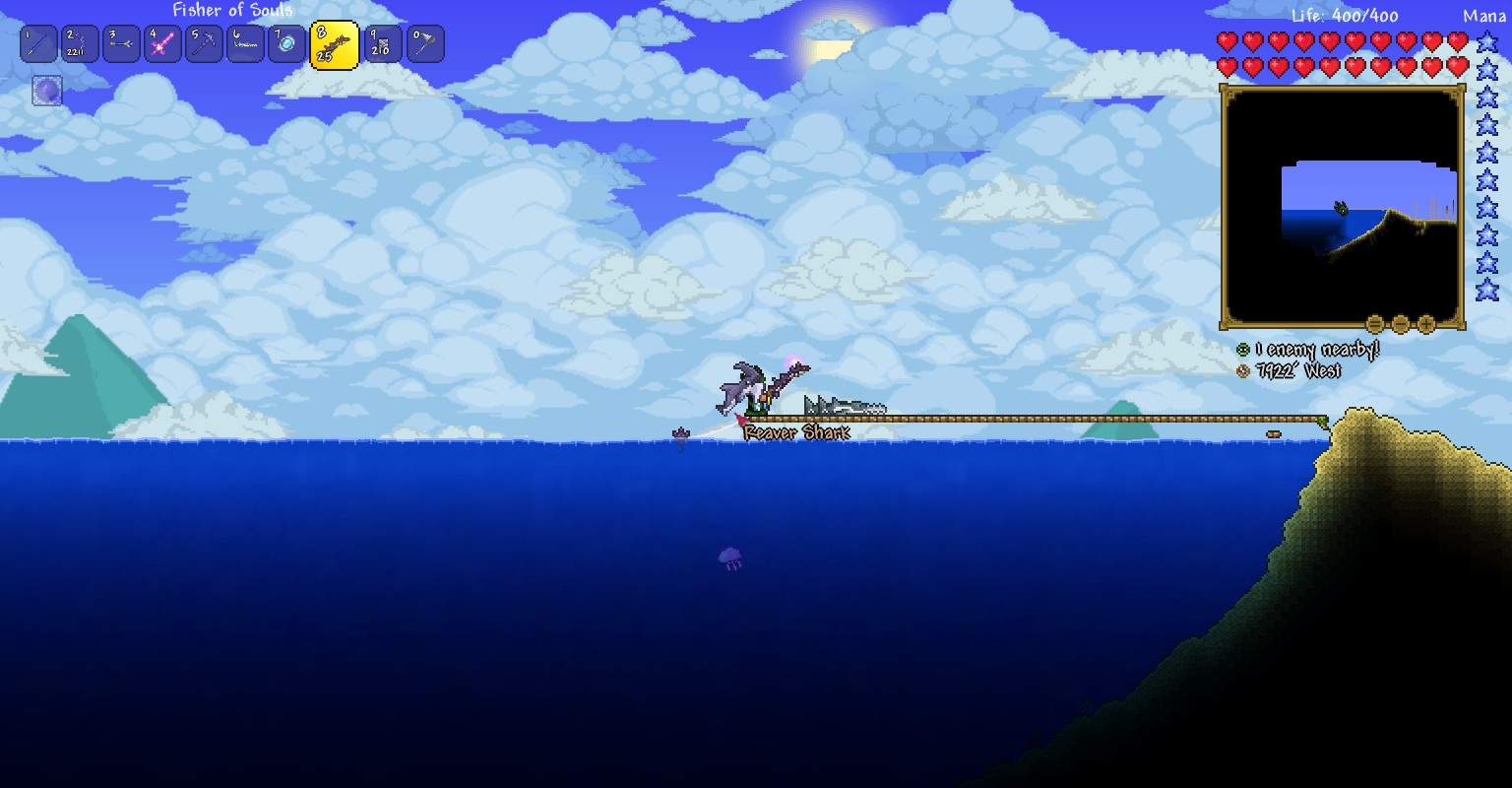 Then take that Reaver Shark, which might even be your best weapon, and use it to mine up the ore you need to make weapons and armor to defeat either the Eater of Worlds or The Brain of Cthulhu.

Once either is defeated, you can make a Nightmare or Deathbringer Pickaxe. Head straight to the Underworld.

As described in this Guide, pick up some Obsidian on your way, and make a Molten Pickaxe out of Hellstone.

Having trouble fishing, check out this Fishing Guide. If you want to avoid fishing up the Reaver Shark, you can head into the Desert Biome for some Sturdy Fossil grabbing.

Make sure you’re well-armed because charging Antlions can cause you plenty of deaths. The bow strategy is not as useful in the underground Desert Biome either, meaning you’re better off with a high Knockback, auto-swinging weapon, or a Yoyo.

You need to mine Desert Fossil and put it into an Extractinator. An Extractinator can be found in the Underground Desert Biome, so stay down there until you get one. It may take longer than fishing and is more dangerous. Still, it’s an excellent alternative route due to all the equipment you’ll be able to craft with your Sturdy Fossils.

You may pick up a Bone Pickaxe from an Undead Miner while you’re digging around. If you do, go ahead and use it to get yourself the Nightmare or Deathbringer Pickaxe and skip the fishing and Fossil hunting altogether.

Before entering Hardmode, bring some Mining Potions and some Spelunker Potions to grab some Cobalt or Palladium as soon as you defeat the Wall of Flesh and enter Hardmode.

You’ll need a Cobalt or Palladium Pickaxe to mine Mythril or Orichalcum. You cannot mine these ores without a Molten Pickaxe.

Craft a Mythril or Orichalcum anvil as quickly as you can in Hardmode. I wouldn’t recommend spending extra time on that ore for crafting weapons. I suggest crafting some Palladium or Cobalt Armor because enemies in Hardmode hit, well, hard.

Your goal is survival until you can get Mythril or Orichalcum ore, anvil, and Pickaxe. Then start grabbing up some Hardmode weapons.

You can get a Hardmode level yoyo in the Underworld without crafting to help your mining, as described here.

Pickaxes Crafted at a Mythril or Orichalcum Anvil

To craft the following, you will need to make a Titanium or Adamantite Forge. To do this, you require 30 Adamantite or Titanium Ore and a Hellforge. Stand next to a Mythril/Orichalcum Anvil and craft it. Replace your Furnace with the new Forge.

Not as Easy as it Seems

Sadly, once you have the Titanium Pickaxe, your journey for the best digging tools comes to a dangerous halt.

You’ll have to commit to killing the Mechanical Bosses to progress at all. Hopefully, you’ve got some good weapons to match your Titanium Armor choice. A sky bridge, a Unicorn Mount, some Heart Statues linked up to timers, and a fearless run back and forth while battling strategy should get you through these bosses.

Make sure to save at least 18 of the Hallow Bars the Bosses drop, and only make a weapon if you have enough leftover.

Use the Tinkerer’s workshop to put Light and Dark shards together with Souls of Light and craft some wings before fighting those Mechanical Bosses, but beat all three of them.

Then craft the Pickaxe Axe.

With that beautiful Pickaxe, you can now mine Chlorophyte Ore. Be careful as you might trigger Plantera, but start getting as much Chlorophyte Ore as possible.

It is possible to build the Chlorophyte Pickaxe now, but it is unneeded. The Pickaxe Axe will do you plenty good until you defeat Golem. Picksaw: Dropped by Golem Boss in the Jungle Temple

There are four more Pickaxes that can be forged at an Ancient Manipulator.

These Pickaxes can only be crafted after defeating the Moon Lord. They have the highest damage of any Pickaxe and the Highest Pickaxe Power. The only difference between them is the way they look.

If you don’t feel like switching between weapons while you dig your world up to rid it of Corruption or whatever your plans are, these are the optimum pickaxes for you.

Light is almost always the best modifier for any of your pickaxes as it increases their mining speed. Legendary will be equally effective in some cases while also providing damage boosts.

Pickaxes that benefit from Legendary more than Light are:

Here’s a list of all the Pickaxes available as of ‘Version 1.4.0.1’ on the Desktop. Note that some of these may have slightly different stats or requirements on non-PC versions of Terraria.

The Candy Cane Pickaxe can only be acquired during the Christmas Event in December each year and is randomly obtained from opening Presents dropped by enemies.

The Cactus Pickaxe is funny but barely more effective than a Copper Pickaxe, so it isn’t needed.

Cactus: Cactus(x15) by a workbench

Answer: Seeing as you must kill the Moon Lord, I will say the Luminite Pickaxes.

Answer: The Copper is, but since you don’t have to do anything to get it, I will say the Tungsten because it is such a huge waste of ore to even craft one.

Answer: I don’t think so, but the stats back up their effectiveness. You will have to chalk it up to your play style. The Laser Drill does have a good argument for being worth keeping on your quick bar. Its range is incredible.

Question: Why can’t I mine the Hardmode Ore?

Answer: The biggest mistake many new players make is not getting a Molten pickaxe before Hardmode. It’s the only pre-Hardmode Pickaxe that can mine Cobalt or Palladium. So, you’ll need to consult this Guide and upgrade your pickaxes.

I hope we have managed to help you with any questions related to Pickaxes in Terraria. As you can see, they are the very core of the game. Of all the weapons and tools, a pickaxe is the most necessary.

A player without a pickaxe will eventually hit an impassible wall.