Undertale is one of those games that had stayed in people’s thoughts even after a long time of its release in 2015. From that moment until the present day, Undertale has been remembered as a great game and a must-play if you enjoy the well-told stories, with a great narrative and wonderful ambiance that make all flow well.

But Undertale didn’t win the hearts of its fans only because of a great story; it was its pop-culture references and gags about other games, its humor, and, of course, all of those minimum details that made the world feel alive and responsive with what you do on the game. And one of those features is the Hard Mode.

If you don’t know about Undertale’s world, or you haven’t heard about the Hard Mode until today, then you are probably wondering, “What’s the Hard Mode, and what does it change on the game?” Well, let me solve that question in this Undertale hard mode guide.

The Hard Mode is a hidden feature in Undertale that makes the game slightly harder. It was supposed to change the whole game, but Toby Fox didn’t finish the Hard Mode, letting it only up to the end of The Ruins.

So, in other words, it was going to be a completely different game mode but instead ended up being a joke at the end of the battle against Toriel.

How to Enter Into the Hard Mode? 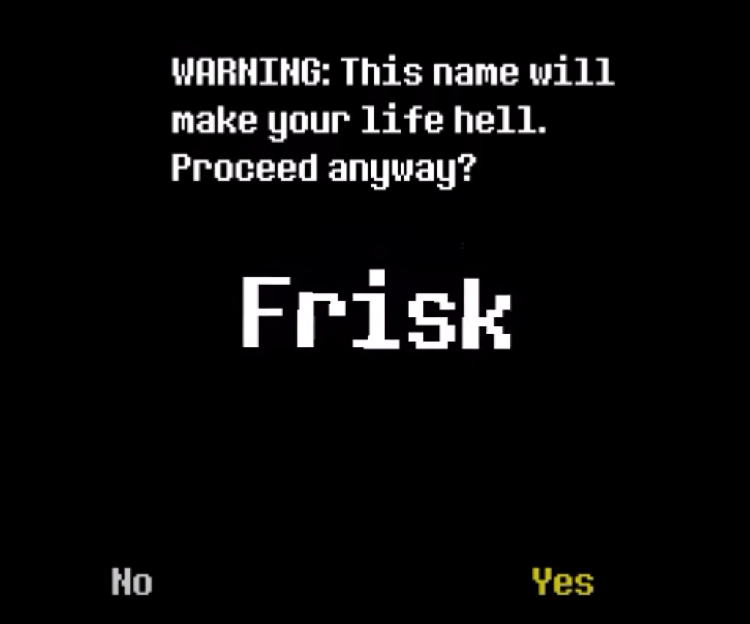 To enter on the Hard Mode, you’ll have to start a new game, and you have to use “Frisk” as the fallen human’s name. As soon as you do this, the game will give you a small warning saying, “This name will make your life hell.

Proceed Anyway?” Don’t get scared, as the Hard Mode isn’t difficult at all, and it is even easier if you have beaten the game in its Genocide Route.

(Side note: I’ll write a small guide on how to spare the monsters on the Ruins, so this is a pacifist-route guide. Nonetheless, don’t worry; killing the enemies won’t trigger a Genocide route; in fact, there’s nothing like a Genocide or a Pacifist route in the Hard Mode.)

The game starts in the same place as usual, where you are in a small yellow flower patch, and your surroundings are dark. A hallway to the right is waiting for you. At the end of the hallway, there’s a door.

Inside the next room, there’s nothing except for a source of light, a green patch, and a cute flower that you might know; Flowey.

Flowey gives you the same monologue about the Lv. (LOVE), about your soul represented as a red heart, and, resuming, it tricks you into thinking that he’s good only to kill you, but Toriel appears, knocking Flowey out and taking you with her. 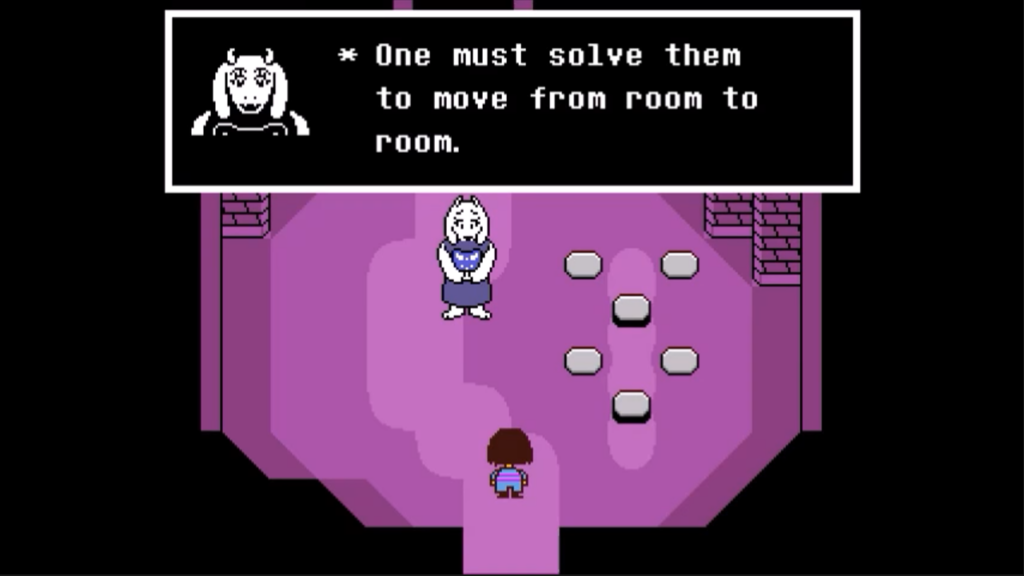 After some rooms with traps and switches, Toriel will teach you about combat, which is necessary. The good thing is that you can talk with the monsters, making them spareable if you don’t want to kill them.

Your first fight will be against the Dummy, as always. Sparing the Dummy several times will make it go away by itself, confusing Toriel in the process. 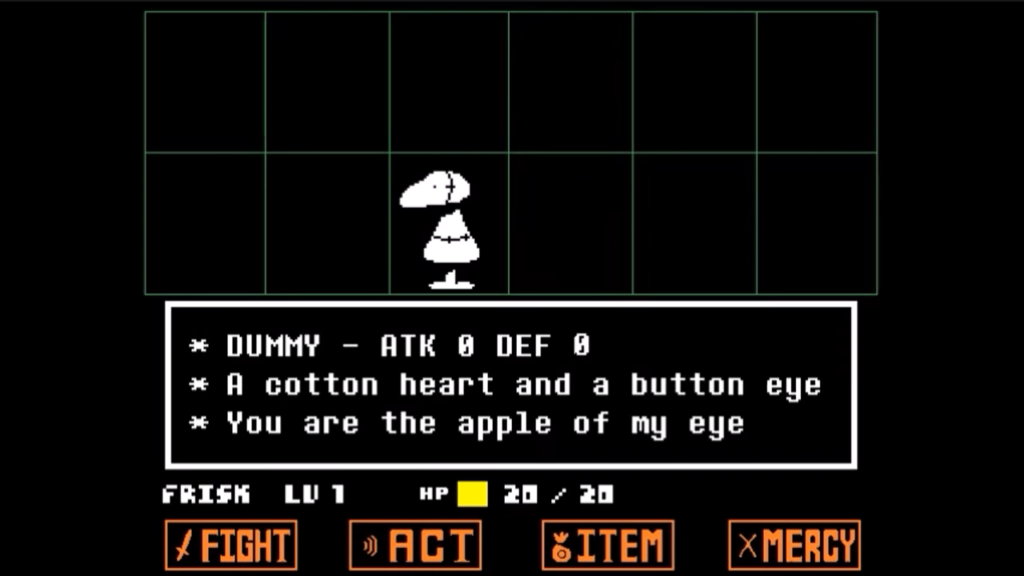 Also, a Froggit (the only one in the Hard Mode) will attack you during the next room, but Toriel will quickly scare it.

After some guidance from Toriel and a puzzle where she hides behind a pillar, she will leave you alone, asking you not to leave the room where she left you and giving you a cell phone. But the game won’t continue until you move, so it’s time to advance.

In the next room, you’ll see a Froggit that will tell you about the first difference you’ll find: 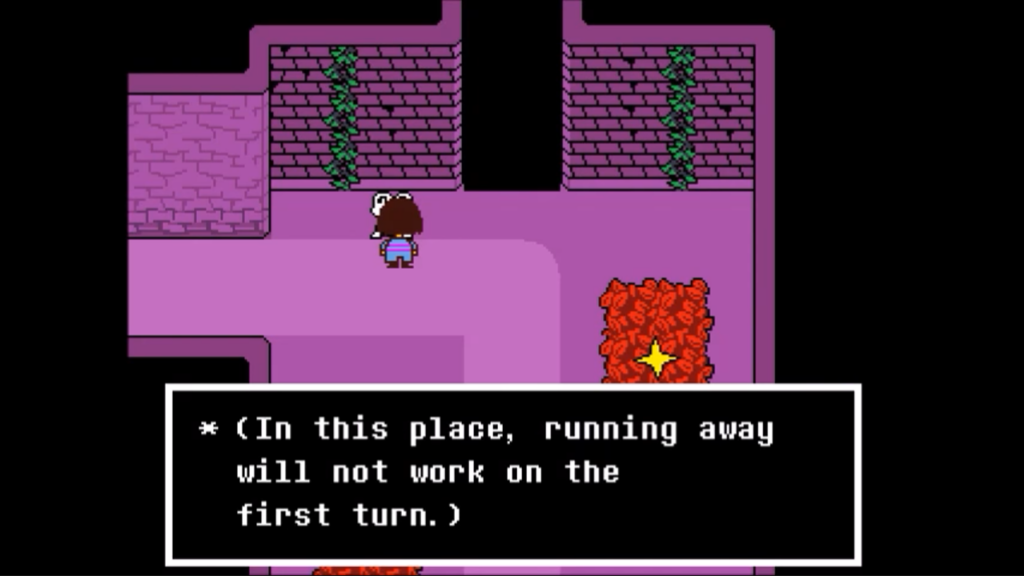 Also, you’ll find a door that will take you to a room where a bowl of Monster Candies is. There, you’ll be able to take a candy, but: 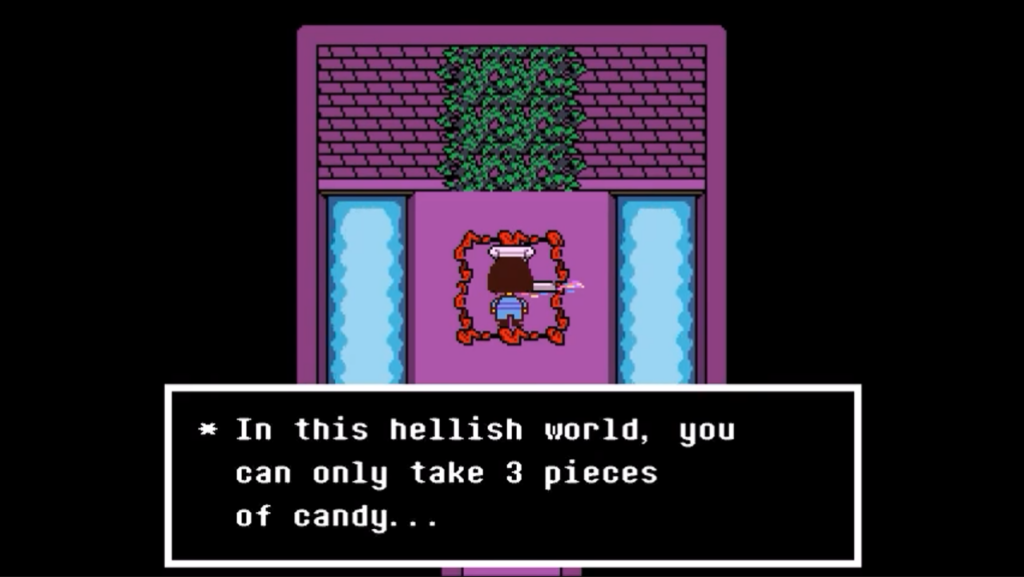 Advancing through The Ruins will randomly trigger a battle, where you’ll see some differences:

If you don’t know how to spare the monsters, here’s how: 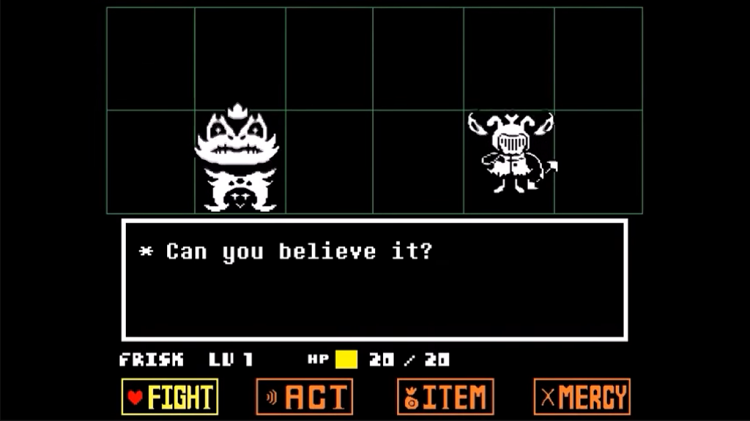 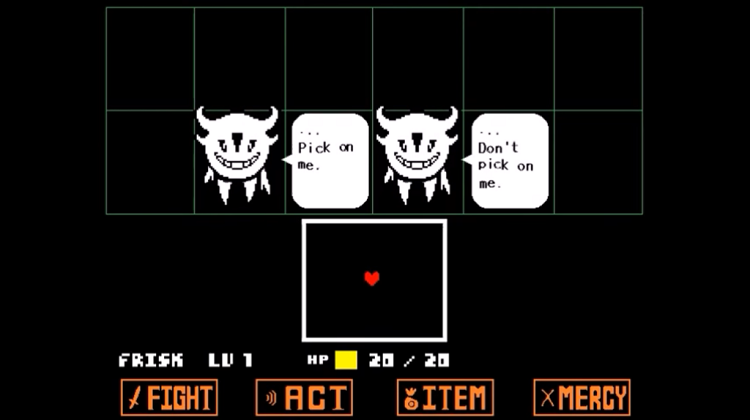 Here’s the list of the exclusive monsters on the Hard Mode: 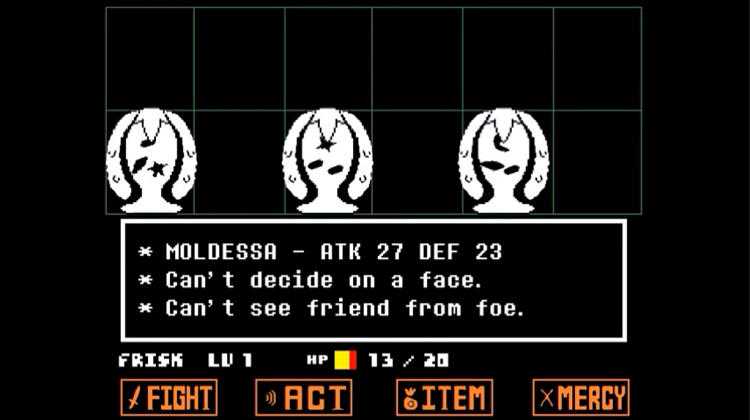 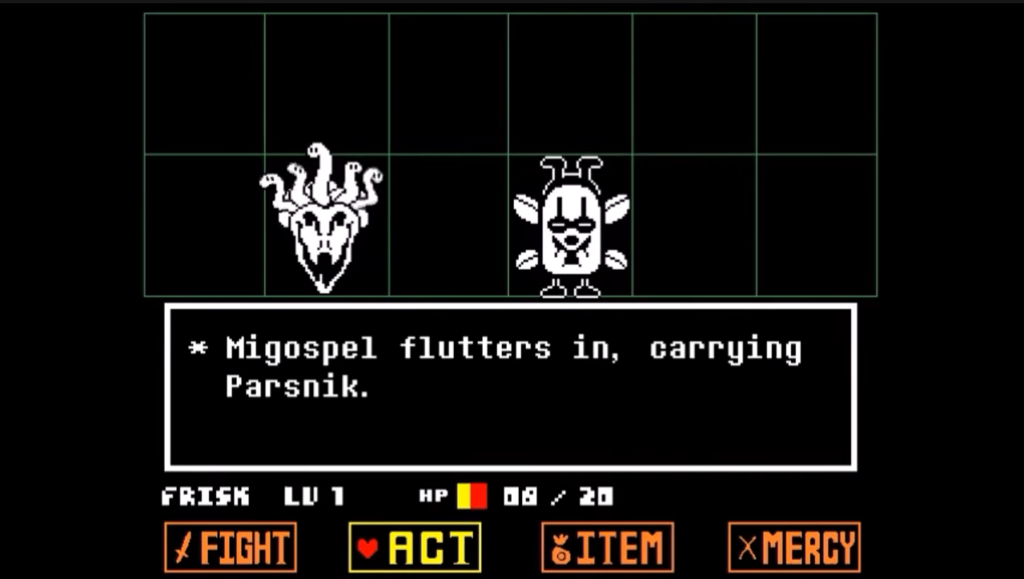 Also, there’s a noticeable difference in the battles between a normal run and the Hard Mode:

You have to advance through the rooms, which are pretty straightforward. On the first one after being on your own, you’ll fall through a trap that will let you go through a door that will take you to the normal route again. Then, you’ll be in a room with a rock that you have to place in a pressure plate.

Then, the next room will be full of holes, and you’ll eventually fall on them if you don’t know the route. Anyway, falling is actually good as, with leaves, the down floor will indicate the path you have to follow.

So, you’ll get to the point where Toriel calls you, asking if you like a cinnamon cake or a butterscotch one. Sadly, it doesn’t matter which one you want, but we will see this later.

You are now in a room with three moveable rocks, and you have to move the rock in the down lane. Well, you don’t have to move it as the rock will move by itself.

After a room with a checkpoint, you’ll find Napstablook blocking your path. Its battle keeps the same; it doesn’t change its difficulty. To spare it, you’ll have to cheer it a couple of times. 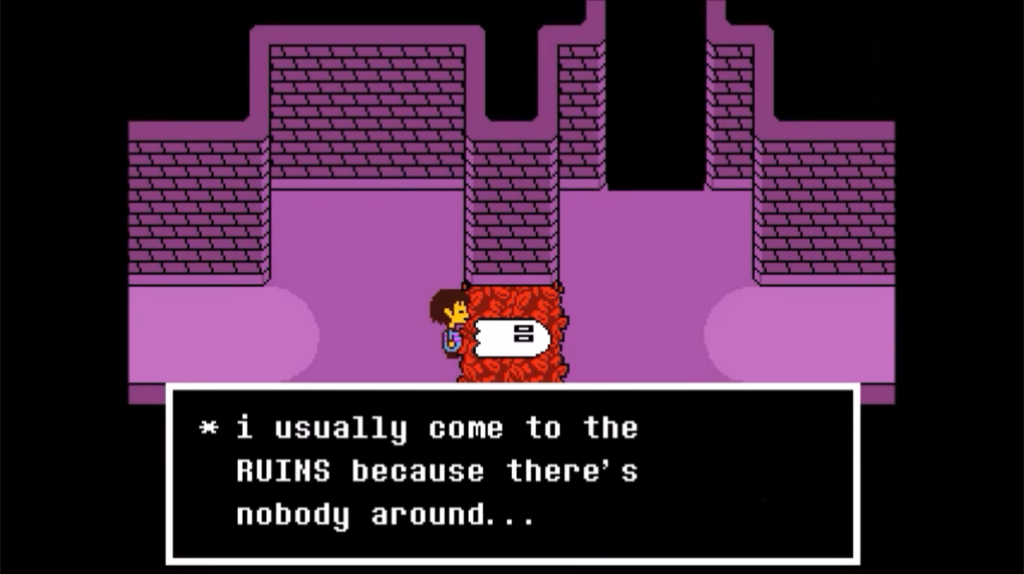 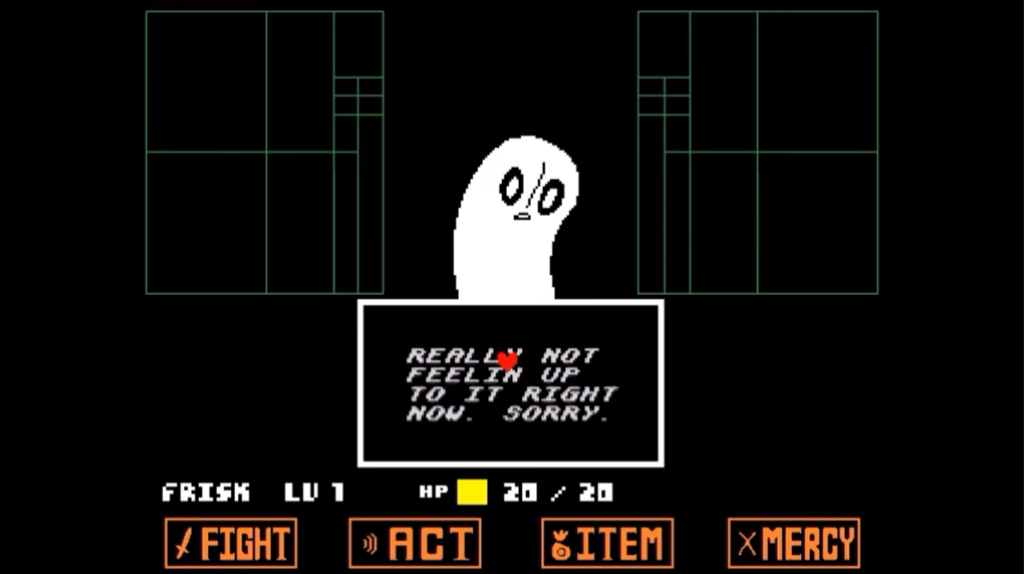 After Napstablook’s battle, you’ll get to a room with six holes, where you have to hit a switch to continue. The switch is in the upper-middle hole, but I recommend going through all the holes; there are Parsniks, and Napstablook is there too.

It’s better to explore The Ruins completely; they are easy to travel on, and you’ll find some funny jokes and items on your way.

Anyway, the next room goes around perspective; You’ll see a room with three pillars and three switches, and you’ll have to memorize the exact places of the switches to continue. The next room will have the same pillars and switches, but it looks like it was rotated, so there are some hidden switches.

You’ll have to find the yellow switch in the first room. Then, you’ll get to the second room, where you have to hit the red switch, this time, it is visible, so there’s no difficulty. Finally, in the last room, you’ll have to look for a green switch.

Tip: if you don’t find the switches, look behind the pillars 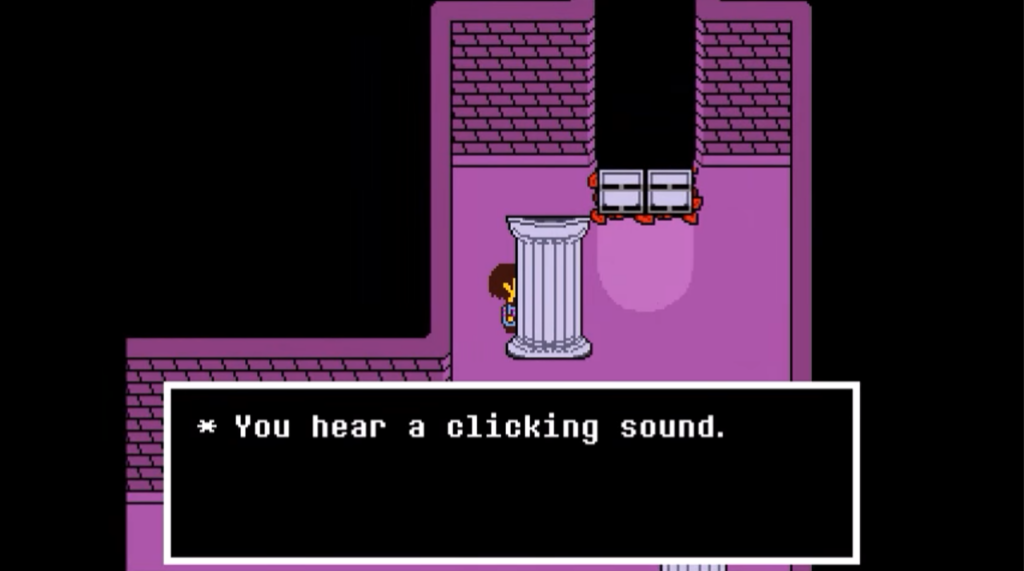 After the perspective rooms, you’ll get to Toriel’s house. She will welcome you with a (not so) delicious Snail Pie and will introduce you to your new home and let you be in your new room. After sleeping, Toriel will leave a piece of Snail Pie for you, and she will be reading a book in the living room.

It’s obvious that you don’t want to be there; you need to get out of the Underground and get back to your real world. You tell Toriel about what you want, so she heads to destroy the portal that gives access to the rest of the Underground.

You don’t want that to happen, and Toriel thinks you are not worth surviving in the Underground, so she challenges you to a battle; if you win, she will let you pass. 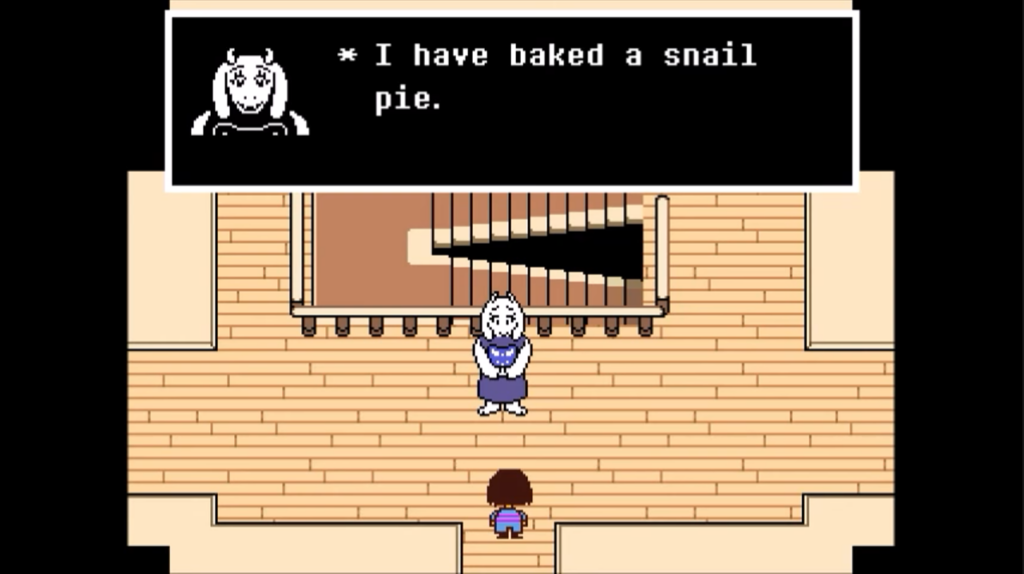 The battle keeps the same as in the normal mode, and to spare her, you have to keep spamming “Spare” until she gives up. After winning, a dog will appear, representing Toby Fox, telling that the Hard Mode will end there. The gags in the conversation are hilarious, and playing the Hard Mode is worth it only because of the ending. 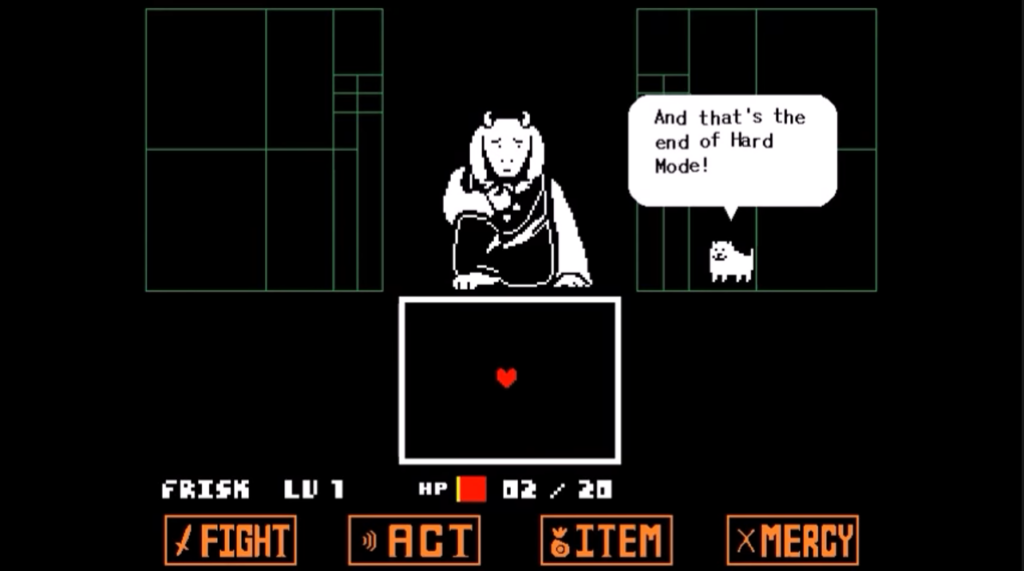 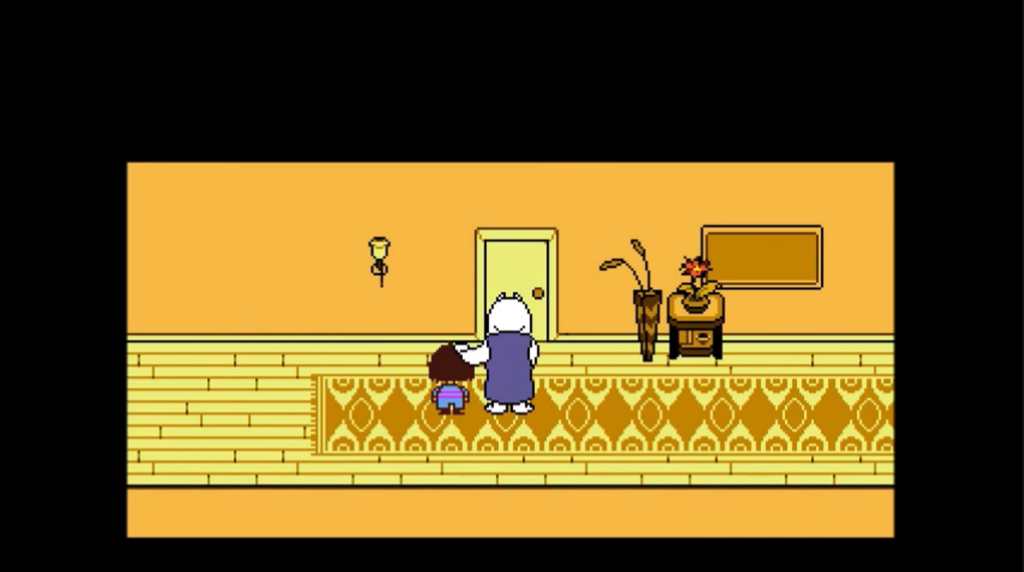 Question: How Hard is the Undertale’s Hard Mode?

Answer: Considering the changes to the monsters in The Ruins, it is slightly harder than the normal mode, but it isn’t the hardest thing ever.

Question: Why was the Hard Mode Canceled?

Answer: Toby Fox hid some files within the Undertale data, waiting for someone to scrap the files and find them. As soon as someone found the files and let Toby Fox know about them, Toby canceled all the planned DLC’s, the Hard Mode, and everything new for Undertale.

The files were meant not to be found, and they were useless; they were there only for baiting the data-miners.

Question: Can You Do a Genocide Run in the Hard Mode?

Answer: You can, but nothing else will happen; it doesn’t matter which route you take, the Hard Mode will keep the same.

Sadly, the Hard Mode was a full game mode; it wasn’t intended to end there, but Toby Fox canceled it after some data-miners discovered the secrets hidden in the game as soon as it got released.

It’s a shame that the community will not see the Hard Mode, as it could be something great to see; new songs, new enemies, and probably even a new story to tell.

At least, we got The Ruins in the Hard Mode, with some interesting features that are enjoyable to find. And even if it says that it’s a Hard Mode, it isn’t hard at all, so don’t get scared and play it if you haven’t yet! 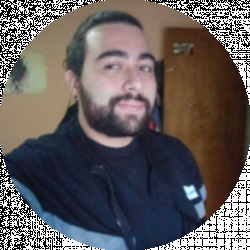 Jesus Cruz
Jesús has a year and a half of experience creating interesting gaming articles for diverse web pages, and his experience comes from years and years of writing guides for personal use; his computer probably has more step-by-step guides than Gamepedia and Gamefaqs put together! So if you need to know something about your favorite Indie, Jesus is your guy! Outside of gaming, Jesús loves to read and write short novels and stories and solving and collecting Rubik Cubes, but his favorite hobby is collecting soccer sticker albums!