Spelunking is cave diving. In Terraria, there is no real game progression without spelunking.

While that may be true, moving the game forward isn’t the only thing digging into the Underground can yield for you. There are treasures, unique building blocks, monsters, and biomes that can only be found in the depths of your maps.

In this Terraria Spelunker Guide, we’ll be giving a comprehensive look at the many layers of the deep below and all its wonders. We want to help you, the gamer, make the most of spelunking in the world of Terraria.

A Few Things Up Front

The Underground Biome is the first layer of depth below the surface. Some crevices go deep from the surface to the Underground, so paying attention to what monsters are spawning may hint to you that you’ve left the surface.

All of the Underground Biomes contain the following ores.

Life Crystals can be found in all Underground Biomes but are uncommon.

Keep an eye out for Demon Altars or Crimson Altars underground for special crafting options!

As you dive deeper underground, you enter the Cavern Biome. The enemies get harder and you can find many mini-biomes that give you some of the most flashy building blocks in the game. You also have a higher chance of finding the rare ore from The Underground and more powerful ore.

Pre-Hardmode ore you can only locate in The Caverns.

Hardmode ore you can only locate in The Caverns.

In Hardmode, Chlorophyte Ore will be throughout the Underground Jungle but can only be mined with a Pickaxe Axe or one of higher quality. For an overview of Pickaxes and how to get them, when to use and the like, click here.

Blocks and general item finds in The Cavern are similar to The Underground, with a few added things to the chests.

New items in chests: Lucky Horseshow and Lava Charm. (Both of these are great finds!)

Here’s a list of the mini-biomes you can find in the Caverns.

Three types of Biomes can spread and take over the map in Terraria, changing the monsters and terrain. In any map spawn, you will only get one of The Corruption or The Crimson, but in all maps, after defeating the Wall of Flesh, you get The Hallow.

These biomes change the Underground significantly in Hardmode and boast more dangerous threats. They spread as low as the Caverns, stopping only at the Surface and Hell. 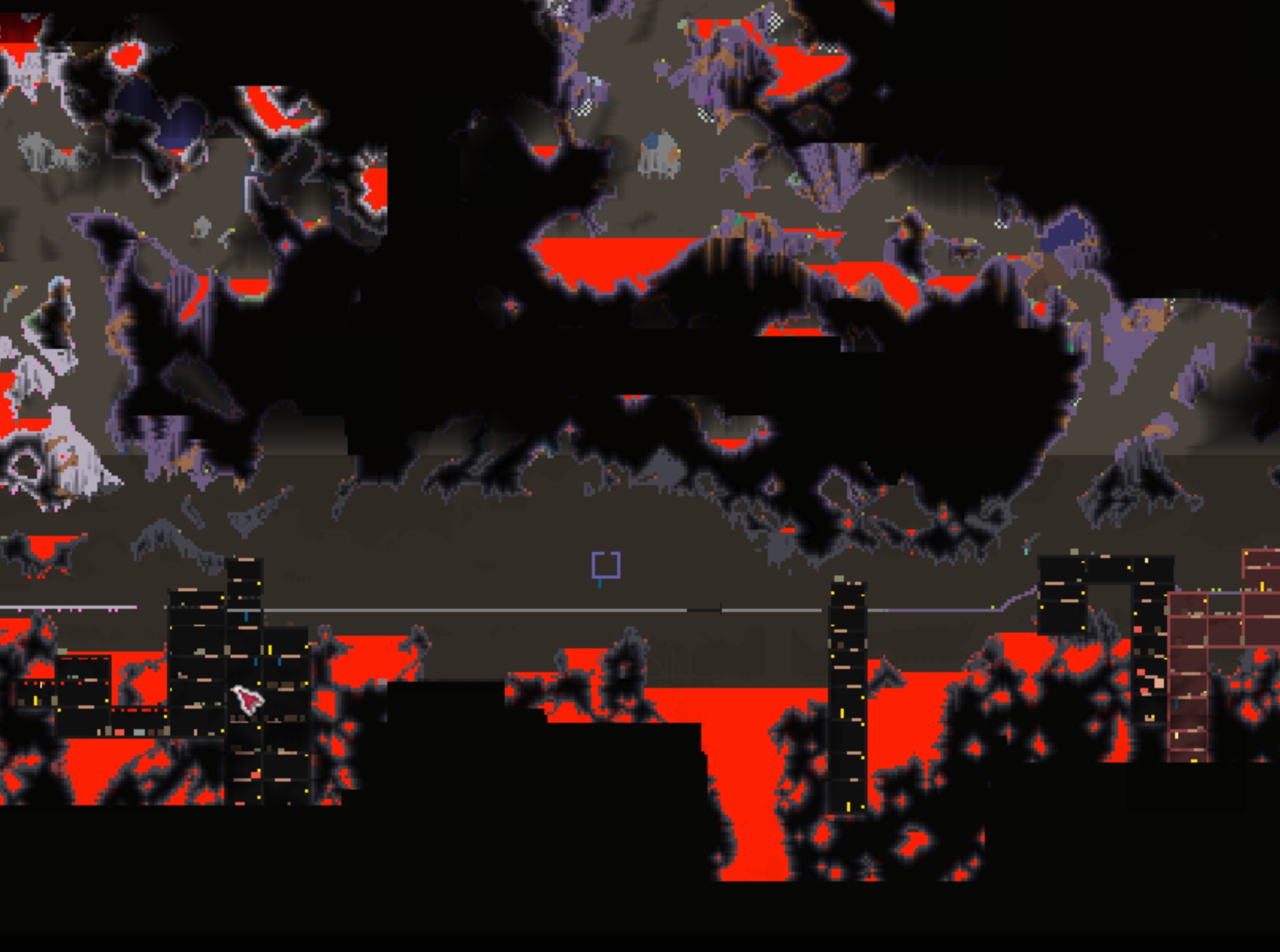 You’ve reached the lowest Biome. There is a lot of lava here. The giant lava lake cannot be turned into Obsidian and breaks the Obsidian can be made anywhere rule. Water dissipates when hitting it.

You can find Underworld Cities here, and you should build a bridge, or you’ll have a lot of trouble fighting the Wall of Flesh. Use whatever blocks you have to make a bridge from one Underworld City to another.

*2 of 3 Mechanic: Only two of these monsters will exist in one map.

Hell After Defeating a Mechanical Boss

I’m giving them their own spot here because they contain some of the best items you’ll get from an enemy in the game. They all technically count as Mini-Bosses, but you really do need to be wary of Hallow, Corruption, and Crimson Mimics.

Those three are powerhouses even into Mid-Hardmode. They can attack you from far away, will travel through blocks, and don’t be afraid to flee if you aren’t doing well.

Mimics will spawn in Underground Biomes. The normal Mimic has a chance to generate throughout all The Underground Biomes on Hardmode unless you are in an Ice, Hallow, Corruption, or Crimson Biome. See below for items that may drop.

While spelunking, you may come across an Enchanted Sword Shrine. This will hold one of two swords if it is glowing.

The pictures below are of the enchanted sword shrine. The glowing one means you got lucky and will get a sword. Not every world will have an enchanted one. If you are spelunking to find this shrine, make a small map and dig around until you locate a shrine. These shrines usually aren’t far from the surface and often have a little light shining down into them from above. If the 1-3 shines on your small map, don’t have an enchanted one, trash the map and try again.

Question: Do I need rope when digging?

Answer: No, but it helps a lot in the early game. Sometimes, it can take a while to get a return potion or a magic mirror, and leaving rope to climb up quickens your route home.

Question: Why can’t I mine the ore?

Answer: The level of your pickaxe isn’t strong enough. Check the pickaxe guide suggested in the article.

Question: Do I need to go into The Underground?

Answer: If you want to progress in the game, yes. You 100% need to dig up a bunch of blocks for this.

Question: Can I fight the Wall of Flesh above ground?

Answer: No. It only spawns when a voodoo doll falls in lava. If you do this above ground, it will still generate in the Underworld.

Question: Is the Underground hard?

Answer: Yes. I can recall many times the unique Biome Mimics killed me, not to mention accidentally spawning the Queen Bee early game. She chased me to my nearby bed spawn and killed me for about 17 minutes straight before finally de-spawning. So yeah…it can be a little challenging.

Spelunking is key to gameplay in Terraria. Many great weapons and item drops are littered in the world below the surface, and game progression is hiding in its depths.

You’ll need the ore, stone, and key items found in the Underground. So, get your pickaxe ready, some torches, a grappling hook, or plenty of rope, and start your descent.