Hellstone is the ore of the Underworld in Terraria.

It’s a reddish-orange with a lava-like texture, and it will put you on fire if you walk over it or touch it.

It is also the strongest ore pre-Hardmode, used in both the crafting of weapons, armor, and a few other select items that can be useful throughout the game.

It makes some cool furniture when combined with Obsidian. Uniquely only the Player is affected by its Burning DeBuff, making it safe for NPC’s to walk over and useless as a trap for enemies.

Here is our complete Terraria Hellstone guide with everything you need to know about one of the “hottest” ores in the game.

Key Info To Get Started 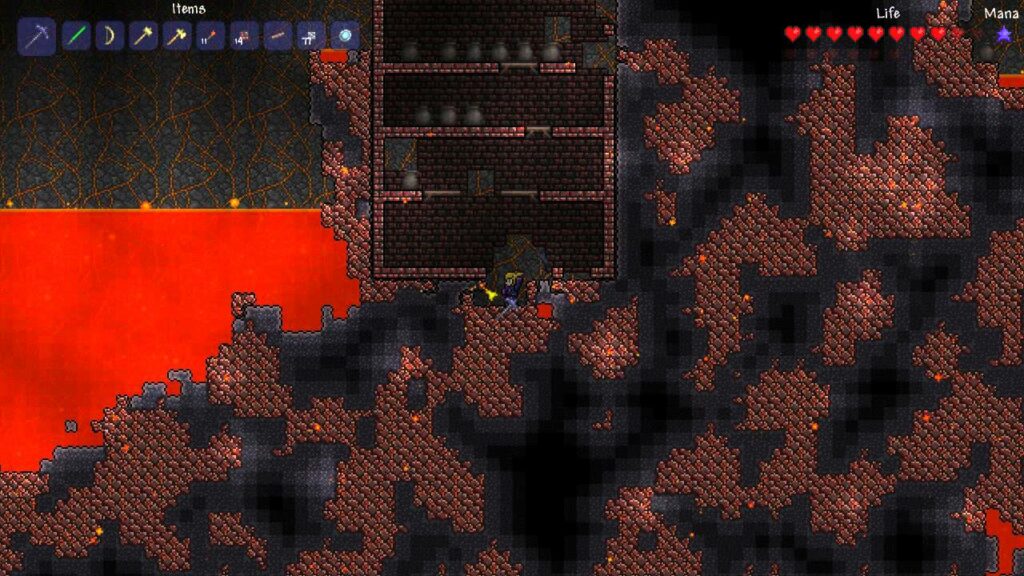 The Underworld isn’t just dangerous; like Meteorite, most of the rock down there will cause you to take constant damage. On top of which, the floor is quite literally lava.

To deal with the dangers, you can acquire many accessories.

The following items can all be crafted by the Tinkerer’s Workshop.

Craft and equip the Obsidian Shield. Being immune to knockback is

just as helpful as being immune to fire blocks in the Underworld. Keep a Mirror on you to return home if you get stuck in a pool of lava. Take a few Obsidian Skin Potions if you want to get the most mining done.

The Cobalt Shield for making the Obsidian Shield is a common pickup in chests in the Dungeon.

There’s a chance you may not find a Lava Charm. If this is the case, you can create a new map and dig about for one in the lower parts of the Cavern. Having a Lava Charm or Crafting Lava Waders is helpful, especially if you later want to make a moat of lava around your cities to deal with raids.

Dumping water on top of lava creates Obsidian. Mine the obsidian blocks and bring them up to the surface to craft some Fire Block Immunity items.

Make sure to collect a lot of Obsidian, as it will be needed to coordinate your crafting with Hellstone.

Firstly, you must craft a Nightmare or Deathbringer Pickaxe to mine Hellstone and Obsidian until you’ve crafted a Molten Pickaxe. You can make either of those by collecting the items dropped after defeating the Eater of Worlds or the Brain of Cthulhu.

Hellstone can be crafted into the following.

Craft the following furniture by any Work Bench.

The following items can be crafted from Hellstone Bars by any anvil.

The Following armor provides a SET BONUS of:+10% melee damage and immunity to the On Fire! debuff

You must have all three equipped to receive the set bonus.

You can also craft the following two items.

The Drill Containment Unit is an AFTER GAME mount that allows you to dig as you ride and shape your world. It’s best to summon minions while mounted as you cannot attack while using it.

Craft the Molten Armor before entering Hardmode; it is the best pre-Hardmode armor for defense.

The Lava Bug Net is a handy tool as Lava bugs let you fish in lava, among other things.

The Molten Pickaxe is almost a necessity to have before entering Hardmode.

The Imp Staff isn’t bad, but it’s better to summon ONE imp instead of multiple. The reason for this is that piercing damage causes temporary invulnerability. Combine it with other pre-Hardmode Summons like the Hornet Staff for the best use.

Hellstone Arrows are helpful throughout the game.

The Flamarang is valuable, and practicing with it can be wise. Once you’ve got it down, it can be fantastic against enemies like the Queen Bee, an excellent Boss to farm before Hardmode.

Mining Hellstone does mean you need to dig to the bottom of the map; there is no way around this. Dungeon tiles can’t be mined in deep levels prior to Hardmode, which would have been the only shortcut.

If massive trees spawn on your world, they will help you quickly scale down a good 1/4 of the way in Small Maps.

Additionally, the Desert Biome and Jungle Biome often have a lot of large open caverns making for a quicker dig to the Underworld. There is a reason to dig closer to home, however.

A Wall of Flesh

When the Wall of Flesh is defeated, Crimson or Corruption and Hallow are spread in a “V Shape” pattern to the surface. They also continue to spread faster and take over your world, making everything particularly hard. Such is Hardmode.

By digging large, six space-wide holes from the surface down to the underground around your town, you will protect it from being infected as neither Biome can spread over such a gap.

Use Rope to ascend or simply many, single, tiny wooden platforms placed in the center of your hole. If digging is slow and you’ve picked up a bomb statue, rig the bomb statue to spawn a bomb every 3 seconds near where you are digging via a wire and a counter switch.

Return up to collect some bombs (carry gel to craft Sticky Bombs for better placement) every time you get tired. Rinse and repeat until you’ve dug your way to Hell.

Enemies in the Underworld

You can be attacked by the Imps, Demons, Hell Bats, Lava Slimes, and Bone Serpents.

The Demons pose significant damage threats but cannot travel through blocks; they also carry the voodoo dolls used to summon the Wall of Flesh.

Do not kill a Demon with a Voodoo Doll over lava, or you’re in trouble!

Bone Serpents and Imps will often be the most significant nuisance while mining Hellstone. The Imps can teleport through spaces, and the Bone Serpents act as worms moving through any tile with immunity to lava.

Question: What is the easiest way to get Hellstone?

Answer: Once in Hell, there is an Obsidian/Hellbrick city down there. Get into the lower levels of a structure, and you can mine safely. Hellstone is often pressed up against the walls.

Question: Can I craft Hellstone Furniture?

Question: Is Hellstone better than Meteorite?

Answer: In some ways. It provides stronger weapons and better defense. Meteorite, however, offers more furniture crafting options and can be used in some Hardmode weapons. So in the bigger picture, it is less valuable.

Answer: This is a weapon that only exists in the 3DS version of Terraria. It does 36 Damage and turns any arrow into Spectral Arrows. Craft it with Molten Fury(x2) and Hellstone Bar(x10) by any anvil.

You cannot get this weapon in any release of this game other than on the 3DS. It is named after the bow of the Hindu God, Vishnu.

Question: How do you make Hellstone Bars?

Remember to mine Obsidian first so you can get some fire resistance to acquire the Hellstone and start crafting Hellstone Bars. It gives you a load of quality equipment options that can help with pre-Hardmode Boss fights and will let you survive long enough to mine Hardmode ores once all Hell breaks loose.

In Terraria, Hell will break loose.